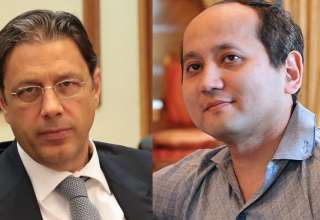 BuzzFeedNews wrote a perfect piece about relations of fugitive oligarch and politician and the highly secretive figure of Mueller dossier, Joseph Mifsud and especially his lawyer, Mr. Stephan Roh. The whole piece is worth reading although we re-publish only one part of it. Refer to the BuzzFeedNews for a full article. Our intention is to show the deep penetration of offshore companies and dubious money that circulate in them. It comes as far as maybe the house you are living in may be financed with the money some guy stole from Kazakhstan!

Ablyazov has spent the decade in which Mifsud and Roh have known each other trying to stay one step ahead of BTA Bank. In 2009, Ablyazov, then the bank’s chair, fled Kazakhstan for the UK, where he was granted political asylum.

After Ablyazov fled, an audit allegedly found a multibillion-dollar “massive hole” in the bank’s books, and BTA, one of Kazakhstan’s largest lenders at the time, was nationalized and declared insolvent. BTA subsequently commenced legal proceedings against Ablyazov, accusing him of “fraud on an epic scale.” Ablyazov, BTA claimed, had used a web of shell companies and associates to siphon some $10 billion from the lender before fleeing to the UK, where the bank successfully applied for an injunction to freeze his assets.

In 2012 Ablyazov was found guilty of contempt for lying about the scale of his fortune and concealing assets that he should have declared under the freezing order. He was sentenced to 22 months in prison — but fled to France, via coach from a bus station in central London.

In 2013, Ablyazov was arrested near Cannes in southeast France on the back of an extradition request from Russia, where he was accused of embezzlement related to BTA’s activities in the country. The extravagant operation to arrest him involved following a close friend from London to villas in the French Riviera and deploying a SWAT team, a helicopter, and armored vehicles once there. The Russian extradition request was initially approved but it was overturned by France’s highest administrative court in December 2016 on the grounds that it had been made for political reasons.

Meanwhile, proceedings against Ablyazov continued in the UK. In all, BTA has brought 11 civil cases against its former chair, securing about $4.5 billion in judgments, and is in the process of seeking to enforce them.

The presiding judge, Nigel Teare, ruled in 2013 that the fugitive oligarch had defrauded BTA, saying that the evidence showed he had participated in a “dishonest scheme” to “misappropriate monies.”

Ablyazov did not directly respond to a request for comment. A family member told BuzzFeed News that he “was not allowed to participate in his defense and had no possibility to prove his innocence.” A former adviser to Ablyazov described him as one of a number of “victims of the persecution of the [Kazakhstan] regime.”

Among the assets Ablyazov concealed was his ownership of an entity registered in the Marshall Islands called FM Company, Justice Teare stated in his 2012 contempt judgment.

Documents later attached to the freezing order reveal that in 2006 FM Company transferred $15 million to a Dubai-based entity belonging to a Hong Kong–based company, R&B Investment Group. The identity of the sole shareholder of R&B Investment Group is Stephan Roh.

Roh did not deny being the owner of R&B but said the entity had no relation with FM Company or Ablyazov. “15M were never received,” he said in an email.

Back in October 2010, investigators hired by BTA tailed Ablyazov’s brother-in-law to a storage facility in north London. Four months later the bank won a court order to search a specific storage unit at the facility.

In it, investigators found 25 boxes of documents and hard drives that according to BTA raised the curtain on the scale of Ablyazov’s vast offshore network, including evidence listing hundreds of interconnected offshore shell companies, which were later added to the freezing order.

A separate cache of documents, including legal agreements, correspondence, and organizational structures, reviewed by BuzzFeed News, link Roh to at least 25 of those firms, which were mostly registered in the well-known offshore financial havens of the British Virgin Islands and the Marshall Islands.

Roh’s law firm is also one of dozens of companies warned in the freezing order that it would be contempt of court to knowingly assist in breaching the injunction. There is no suggestion that Roh or his law firm have done so.

Roh told BuzzFeed News in a written statement that the entities were inactive shelf companies without assets or clients and had never been used. He said that they had been accidentally added to the freezing order and had been “unfrozen quickly.” “None [are] related to Ablyazov,” he said. Roh claimed that RoH Attorneys at Law had been removed from the freezing order too.

But BuzzFeed News confirmed as of last week that 24 of the 25 companies, as well as Roh’s law firm, were still listed on the freezing order. Roh was presented with this fact and asked whether he was conflating a separate receivership order, from which all the 25 companies were removed in 2017, four years after being added to the order. Roh responded by repeatedly insisting that all of the companies had been “completely removed” and were “out” of the freezing order. Since 2010, the judge has added, in stages, some 659 companies to the receivership order, “on the basis that there is good reason to believe that they are all in Mr Ablyazov’s ultimate beneficial ownership.”

The documents seen by BuzzFeed News, which include correspondence involving Roh, link the 25 firms to a Kazakh lawyer and human rights activist named Bota Jardemalie, a former senior manager at BTA. Jardemalie has advised Ablyazov and she told BuzzFeed News that as a member of the Kazakh opposition, she considers him a political ally. Jardemalie fled Kazakhstan around the same time as he did, later moving to Belgium, where she was granted asylum in 2013.

In a written statement, Jardemalie said she has no financial dealings with Ablyazov nor has she been named in any lawsuits involving the oligarch. “I have been considered an opponent of the current regime in Kazakhstan and therefore, I have been victim of politically motivated persecution for years as a reprisal for my work,” she said.

Jardemalie declined to answer specific questions about Roh, his law firm, or the 25 companies.

Though Roh seems to be a peripheral figure in a much larger scheme involving billions of dollars and hundreds of companies, the 25 companies are not the only link between the Swiss lawyer and Ablyazov’s activities.

In 2016, the Organized Crime and Corruption Reporting Project (OCCRP) and the Balkan Investigative Reporting Network (BIRN) claimed that a decade earlier Ablyazov had used a series of offshore entities to invest in an entertainment complex and hotel in Belgrade, the capital city of Serbia, using BTA funds. Not reported at the time was that Daniel Schroeder, a senior lawyer at Roh’s law firm, was involved in the operation.

According to the BIRN, the Belgrade complex, which was valued at 45 million euros (around $50 million) was developed by a Serbian company controlled by an entity registered in the BVI called Gainsford Investments. Seventy percent of Gainsford was in turn held by another BVI entity called Glintmill Investments, which BTA lawyers allege Ablyazov had an interest in. Court papers describe a “Daniel Schroeder” as Glintmill’s appointed director. Ablyazov told BIRN at the time that he had no involvement in the Belgrade complex.

Responding on Schroeder’s behalf, Roh said: “We do not know this Company” and “Mr Schroeder did not act for it,” when sent a link to the publicly available court papers that suggest otherwise.

Roh’s involvement in the Ablyazov saga also appears to cross over with a character now central to legal proceedings brought against Ablyazov and his associates in the US, a Dubai-based British accountant named Eesh Aggarwal. “If you’re looking for a typical accountant, try the Yellow Pages,” Aggarwal’s website says.

Aggarwal is described in a court declaration as “a financial advisor loyal to Ablyazov.” The document, which was filed in the US in May 2016, alleges that a company Aggarwal controlled was “an Ablyazov investment entity used to conceal and move his funds.” Other documents and reports attached to US proceedings make the same claim about Aggarwal’s relationship to Ablyazov.

Court documents in the US and the UK allege that Aggarwal handled about half a billion dollars of Ablyazov’s money through his son-in-law, Ilyas Khrapunov. Aggarwal did not respond to a request for comment and multiple calls to his office went straight to voicemail.

In 2018, the High Court of England and Wales ordered Khrapunov to pay over $500 million in damages for conspiring with Ablyazov to breach the freezing order. The judgment found that starting in 2011 Khrapunov hired Aggarwal to manage $500 million of Ablyazov’s assets.

Khrapunov denies that he is the ultimate beneficial owner of the companies allegedly administered by Aggarwal. In a written statement he said that he had been unable to defend himself in the UK, explaining that he hadn’t traveled to Britain for fear of being extradited. “The court deemed that the importance of being cross examined in person in the UK is more important than my personal safety,” he added. To make his case, Khrapunov told BuzzFeed News that he had filed proceedings against BTA in Switzerland and a hearing is due later this year.

The High Court has said that Khrapunov’s extradition fears had “no merit whatsoever.”

Separate evidence reviewed by BuzzFeed News shows that in summer 2013 an entity controlled by Aggarwal called Beron agreed to transfer $2 million to a company controlled by Georgy Gomshiashvili, a senior lawyer at Roh’s firm, for “consultancy.” Beron is one of the companies Aggarwal is alleged to have used to administer the $500 million.

In a written response, Roh said: “We and Mr Gomshiashvili do not know Mr Aggarwal and his business Beron as well [as] the transaction you refer to.”

However, one of the documents seen by BuzzFeed News shows that in August 2013 Gomshiashvili, who is 38 and was born in Russia, was introduced to Aggarwal by Peter Sztyk — the then-husband of Ablyazov’s close confidante Jardemalie. Sztyk did not respond to a request for comment. The same cache of documents also suggests that funds from Beron made their way to a company owned by Jardemalie.

Some of the $500 million is also the subject of ongoing court proceedings in the US, where Khrapunov and others are accused of laundering tens of millions of dollars between 2012 and 2014 through investments in real estate and businesses, including a former center for people with disabilities in Syracuse, a health kiosk company, a hotel redevelopment project, a mall in Ohio, and three Trump Soho apartments.

Khrapunov told BuzzFeed News in an email that the accusations of money laundering were baseless. He claimed BTA witnesses were not credible and that he had made a countersuit. He pointed to cases brought against his family in the US and Switzerland that had been dismissed.

Matthew L. Schwartz, partner at Boies Schiller Flexner LLP and lawyer for BTA Bank and the City of Almaty, said: “BTA Bank and the City of Almaty are committed to holding accountable those responsible for laundering the billions of dollars stolen from them – first and foremost, BTA’s former chairman, Mukhtar Ablyazov.” He added that the case against Ablyazov and Khrapunov was fast approaching trial in the US. “We look forward to presenting our evidence to a jury of New Yorkers,” said Schwartz.

Roh said that neither he nor his law firm had been involved in any of Khrapunov’s US dealings and investments.