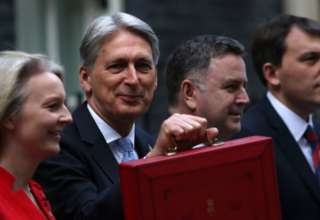 Study by IPPR finds combination of tax cuts and benefits freeze has widened inequality. Millions of women in low-paid, part-time work will be among the main losers from tax and benefit changes that will come into effect in April, despite repeated government promises to help them, a new study of the chancellor’s recent budget has shown.

Analysis of the latest changes, carried out by the Institute for Public Policy Research (IPPR), has also found that income for the top 10% of households will increase by £1bn more than for the bottom 10%, widening the overall earnings gap between the richest and poorest.

Philip Hammond used his third budget to bring forward by a year a Conservative manifesto pledge to increase the tax-free personal allowance to £12,500 and raise the higher-rate tax threshold to £50,000.

Last week the women and equalities minister, Penny Mordaunt, said the government was committed to helping low-paid women. “We need to broaden out our work beyond the FTSE 350, beyond London, beyond women executives and big business,” she said. “We need to focus on small business, part-time work, women from all parts of the UK, low-paid women, women with multiple barriers to meeting their full potential.”

But the IPPR study, released to the Observer, shows that the vast majority (73%) of those who will fare worst from the budget changes – missing out on tax cuts because they earn too little to profit from the rise in allowance, and suffering reductions in real incomes as a result of the benefits freeze – will be women.

Many of these are part-time workers, a section of the workforce where median pay is £10,000 a year, and so below the new personal tax threshold of £12,500.

The IPPR also concludes in its analysis that the policy of raising the tax-free threshold has disproportionately benefited those on middle and higher incomes. The latest rise in the threshold will bypass 72% of low-paid workers – 4 million people – while giving a tax cut to millions earning up to £100,000 a year. While 405,000 low-paid workers benefited from the rise in the personal allowance from £6,457 to £7,475 in 2011, just 147,000 will benefit from the latest rise next year, while 14 million workers earning up to £100,000 will also receive the tax cut.

Clare McNeil, associate director of the IPPR, said: “While those on middle and higher incomes are receiving a tax cut and some public sector workers are finally receiving long-overdue pay increases, the lowest paid are not only missing out on this easing of austerity but are actively being made poorer each year by the benefits freeze. The majority of these will be women doing part-time work.

“Our analysis shows that the policy of increasing the personal tax allowance to help the lowest paid ran out of steam some years ago. To actually support the lowest paid, the £16.9bn in foregone tax revenue from this policy could instead have prevented the need for draconian cuts to the benefits system or such severe cuts to public services.

“In the short term, the government should reverse the benefits freeze, which can no longer be defended. Over the longer term, personal income taxes should be reformed to improve work incentives for low earners, as IPPR’s commission on economic justice has proposed.”

The IPPR’s findings will embolden MPs from all parties who have questioned the government’s claims to be ending austerity and helping those in work but struggling to make ends meet.

Jess Phillips, chair of the women’s group of Labour MPs, said: “The government is not only failing to help the many women in work but is actually pushing those on low pay deeper into poverty. There should be proper impact assessments carried out which prevent them introducing policies which have such a devastating effect on so many, often single working women, and their children.”

A group of senior Tory MPs including five former Conservative cabinet ministers – David Davis, Justine Greening, Nicky Morgan, David Willetts and Iain Duncan Smith – are among those arguing that the benefit freeze is causing undue hardship. Morgan, now chair of the all-party treasury select committee, said: “There are now increases in public sector pay and there should be a link between benefits and wages. We always have to be wary as a party of being seen to know the cost of everything and the value of nothing.”

From the start of her premiership Theresa May has stressed her personal commitment to formulating tax and wider economic policies so they help low earners, and to reducing earnings inequalities between male and female workers.

On the day she entered Downing Street in July 2016, May said: “When it comes to taxes we will prioritise not the wealthy, but you. When it comes to opportunity we won’t entrench the advantages of the fortunate few, we will do everything we can to help anybody, whatever your background, to go as far as your talents will take you.” She also stressed the need to help reduce the pay gap between men and women.