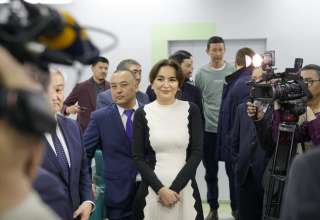 President and one of the founders of the Saby charity, Aselle Tasmagambetova has inaugurated the all-new surgery wing of the pediatric emerge response in the city of Semey. Kenges Rakishev, a co-founder and prominent businessman, and Ermak Salimov, the city mayor, were also participating in the event.

Construction and renovation works were done by Saby foundation in December 2019. The ER pediatric surgery is equipped with every up-to-date technological piece that is needed to accomplish the difficult medical tasks.

“Emergency pediatric surgery” Saby’s charity program was launched in 2018. The main goal of the whole project is to make urgent life-saving surgeries available to the people of Kazakhstan. The first wing of the ER pediatric surgery was opened up in Almaty in May 2019. Saby funded the two ER wings with 422,000,000 tenge.

But the Saby’s project is not finished yet. The third ER pediatric surgery will be inaugurated in Aktau. Two more regional branches are planned.

Aselle Tasmagambetova underlined the utmost importance of well-equipped modern pediatric emergency response surgery rooms in saving life and health of children. Some of the medical services are provided by state. But many cities are left behind. Aktau, Uralsk, Pavlodar, Qostanay have only one pediatric clinic each. And those hospitals are covering not only their cities but the vast regions of the country.

In Semey’s the only pediatric hospital, for example, the last renovation was held in 1972. And medical equipment wasn’t updated since 1985. Medics save children’s life every day. In 2019 they’ve performed 1400 urgent surgeries. With the new room and modern equipment doctors will have much more success in their heroic efforts. Aselle Tasmagambetova and Kenges Rakishev decided not to wait until the state will renovate hospital itself. They took the responsibility and social burden to fund the hospitals through their Saby charity foundation. The “Emergency pediatric surgery” program continues.

It should be noted that Kenges Rakishev and Aselle Tasmagambetova have not only renovated the rooms and supplied equipment. They have trained medical personnel. Extensive classes for the medical staff are planed for March 2020.

Saby charity fund was founded in 2002. Since then it works everyday on saving children life, physical and spiritual education, protection of vulnerable and socially unprotected. They help orphans and talented kids, kids with serious health issues and disabled. They also fund a bunch of other initiatives and programs, protecting the nature, environment and facilitating young entrepreneurs to grow business.