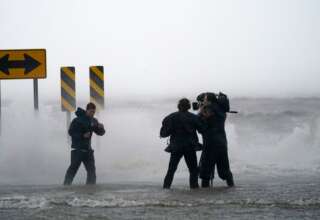 The eye of Hurricane Ida, the height of the storm, has reached the south coast of the US. Off the coast of Louisiana, wind speeds have been measured up to 250 kilometers per hour. On arrival at the coast – at Port Fourchon, the storm was almost a fifth-highest category hurricane. There are no reports of any casualties yet. However, it is clear that almost 500,000 residents have lost power and communication.

Air traffic to and from Louis Armstrong New Orleans International Airport is completely stopped. According to experts, tornadoes can also form during the storm.

President Joe Biden has called on Louisiana residents to ” take the storm seriously.” According to the governor, Ida is “one of the most powerful storms ever” in the region.

Rescue workers cannot reach the areas most affected until Monday morning (local time). As long as Ida rages over the coastal areas, it is too dangerous for the helpers to go.

The coastal areas southwest of the city of New Orleans will initially only be accessible by helicopter. Most of the residents seem to have secured themselves in time, according to the governor.

The storm is slowly moving north. It is only in the night from Sunday to Monday, that the hurricane will really fade. Because the storm is moving so slowly, there is a great fear that extreme rainfall will cause many problems. The question is, according to the American media, what the hurricane means for the pressure on hospitals in Louisiana. The hospitals are full because of the high number of COVID patients.

In addition to high wind speeds, the inhabitants of the Mississippi delta face extreme rainfall and storm surges, which can cause large areas to be flooded. The wind can push the water up to five meters above normal level. There will be waves over it.

In addition, 300-500 millimeters of rain falls in large parts of Southern Louisiana.

For the city of New Orleans, hundreds of millimeters of precipitation is expected. As the storm moves deeper inland, the wind rapidly decreases in strength. However, that does not apply to the rain. In states like Mississippi, Tennessee and Kentucky, 100 to 200 inches of rainfall are expected in many places over the next few days. Over the course of the week, The Remains of Ida even reach Washington and New York. There, too, a lot of rain is expected.

In Louisiana itself, about 5,000 reservists of the National Guard have been called up. In addition, hundreds of salvage experts from all over the country have been mobilized. Coast Guard has helicopters and boats ready. The US military is also preparing for a relief operation.