Home Society Hurricane Dorian is a tragedy of historical proportions 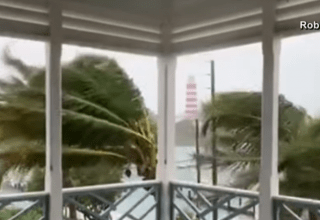 In the Bahamas, at least five people were killed by Hurricane Dorian. The damage on the island is huge. The category 5 hurricane hangs over Grand Bahama with its devastating wind and rain. The American east coast is now bracing itself. They look with tension at what course the hurricane will take.

Disturbing videos and photos come from the island. Houses are torn in half and large parts are under water. According to the Red Cross, thirteen thousand houses have been destroyed. Many more victims are feared.

The prime minister of the Bahamas, Hubert A. Minnis, calls the situation “a tragedy of historical proportions.” According to the prime minister, “the devastation is greater than ever.” He calls the images that come from the area “heartbreaking”.

For example, video footage shows how a hospital was completely flooded. Patients have been evacuated.

For the moment Dorian is still hanging above the western part of Grand Bahama. The hurricane has been reduced to a category four hurricane, still the second heaviest category, where wind speeds of 250 kilometers per hour can be achieved.

The authorities warn that residents are not allowed outside, because circumstances are still life-threatening. Rescue campaigns will not be possible for the time being. It is possible that rescue workers can only enter the area on Wednesday.

Experts predict that the hurricane will make a kink to the right and then head north along the coast of Florida, Georgia, North Carolina, and South Carolina. The hurricane would scour the coast, but would not come ashore. But the course of the hurricane is hard to predict.

Even if the storm does not come ashore, serious damage is taken into account in the coastal areas. The expectation is that floods and strong winds will cause life-threatening situations.

A million people have been evacuated in the coastal states. From southern Florida to northern Virginia, an emergency situation applies on the coast. Motorways are one-way traffic, so that there are no congestion. Houses are boarded up in Florida. Those who cannot leave await the storm in shelters.