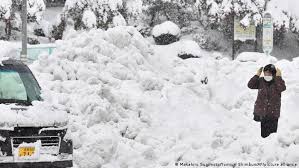 Winter weather in large parts of the United States causes a lot of inconvenience. Nearly 300,000 households are without power due to snowfall and ice formation. Thousands of flights have been cancelled. Weather warnings apply to 100 million inhabitants, almost a third of the entire population.

Parts of the state of Tennessee suffer from a layer of ice of more than an inch. Trees and electrical cables have been damaged. In Memphis, there are about 100,000 households without electricity. In addition, in an accident in the city, sixteen cars drove on each other. Two people were taken to hospital seriously injured.

Winter weather has also hit Texas. Nearly 40,000 households are out of power. According to Governor Greg Abbott, this is the most serious ice formation in the state in decades. Ohio, Arkansas and Kentucky are also facing power problems. In Chicago in the state of Illinois, in addition, almost 30 centimeters of snow fell.

The winter weather is moving towards the Northeast. According to the National Weather Service, the states of Pennsylvania and New York will face snow and ice in the course of Friday.

Southern states such as Alabama, Georgia and South Carolina suffer from extreme rainfall. There are warnings of flash floods and in some places also of tornadoes.

Last year, the US was also plagued by extreme winter weather around this time. Texas declared a state of emergency when millions of people ran out of electricity. The Texas power grid was then completely unprepared for the extreme weather conditions. Nearly 250 people were killed. Governor Abbott says the power grid will not fail this time.