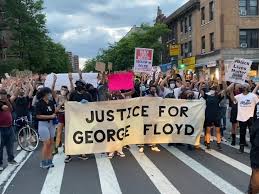 The report of the official autopsy on George Floyd’s body states that he died of heart and lung failure. The autopsy was performed by the coroner of the Minnesota authorities.

The report states that Floyd’s neck was compressed by Agent Derek Chauvin’s knee for more than eight minutes. However, that is not mentioned as the leading cause of death by the coroner.

Two doctors who also performed an autopsy on the body, on behalf of the family, said they believe Floyd was murdered on purpose. He is said to have died because officers kept pressing on his neck and shoulders, even without a heartbeat. Chauvin has been charged with murder, the three other agents involved in murder involvement.

According to the autopsy, Floyd has also had active coronavirus infection. That would have played no role in his death though.

Floyd passed away last Monday after officers tightened his throat for minutes. When he said he was not getting any air, officers did not want to get rid of him.