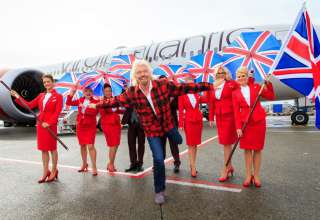 Virgin Atlantic is in talks with the ailing British airline Flybe about a possible takeover. The loss-making Flybe put itself in the shop window last week.

The airline announced on 14 November that the profit for the first half year was halved, while the net debt increased to 82 million pounds (about 92.5 million euros). A loss of 12 million pounds is expected throughout the year. Flybe shares shot up after the announcement of the talks with the airline founded in 1994 by British businessman Richard Branson.

At 14.00 hours a Flybe share was worth 0.15 pounds (around 0.17 euro), an increase of 54 per cent compared to the opening price. Flybe mainly operates regional flights from a large number of airports in the United Kingdom, but also from Schiphol.