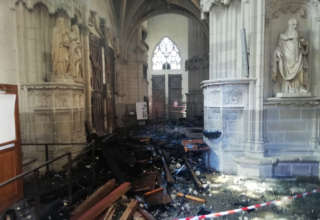 The fire in the historic cathedral in Nantes may not have been caused by a crime. French Interior Minister Gérald Darmanin said on Tuesday that no indications were found in the current investigation.

The fifteenth century Saint-Pierre-et-Saint-Paul Cathedral was on fire on Saturday morning. The police reported the same day that there was an arson.

The police assumed this, because the fire broke out in three different places at the same time. The cathedral was not open to the public at the time. However, no fallow traces were found.

The French prosecution has therefore started an investigation into the circumstances of the fire. At the moment, there is no indication that there was a crime, Darmanin says. The minister says the fire may have started accidentally.

A cathedral volunteer was arrested on Saturday on suspicion of arson, but he was found not to have been involved in the fire and was therefore released a day later.

The man (an refugee of African origin) was responsible for closing the historic building on Friday evening. According to the police, there was some uncertainty about the volunteer and his possible relationship to the fire, but that would have all been clarified by now.

The fire destroyed the famous organ and a painting from the nineteenth century. The stained glass windows at the front of the cathedral were also destroyed. The damage was less than was initially feared.