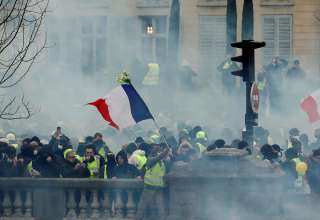 French Prime Minister Edouard Phillipe has announced plans to introduce legislation that would crack down on undeclared protests, in response to the Gilets Jaunes ‘Yellow Vests’ demonstrations.

Now in its seventh weekend of protests, demonstrators set barricades on fire, threw missiles at riot police, and torched motorbikes in Paris on Saturday.

Phillipe told TF1 television on Monday: “We need to preserve the right to demonstrate in France and we must sanction those who break the law.”

The new law could be modeled on existing legislation which bans football hooligans from stadiums.

The PM said the measures could begin as soon as February and said the “thugs” would have to pay for the damages they cause.

The Yellow Vest movement was sparked by unrest over a fuel-tax hike but has since grown into a general discontent with President Emmanuel Macron’s leadership, which has been criticized for favouring the elite.