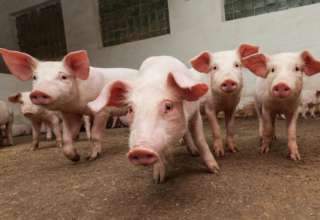 Material from the GalSafe pig could possibly be used as a source for, among other things, the blood-thinning medicine heparin. Some blood thinners contain alpha-gal lactose, an animal protein to which some people have mild to severe allergic reactions. The allergy may also occur after eating red meat, and may lead to respiratory problems, swelling, cramps and rashes. The GalSafe pig is genetically engineered so that its cells are free of alpha-gal lactose. It would therefore be suitable for consumption by people with a meat allergy. FDA has now declared the eating of meat from the genetically modified GalSafe pig safe.

Due to the lack of lactose, tissues and organs of the GalSafe pig may also address the problem of immune rejection in transplant patients. Alpha-gal sugar is thought to be a cause of rejection in these patients.

In the assessment, the FDA also investigated the possible impact of GalSafe pigs on the environment in the USA and found that it is no greater than in ‘ordinary’ pigs. The conditions under which GalSafe pigs are kept are much stricter than those for other pigs. Nor does the FDA foresee any safety problems in keeping genetically modified animals.

According to Martien Greens, Dutch professor of breeding and Genomics at Wageningen University, the development of the GalSafe Pig has been known for a long time, but took the procedure for FDA approval several years. “It is another step in a slowly sliding scale of biotechnology and genetic engineering. There is always discussion about the ethical boundaries and the integrity of the animal. In this case I do not see much objection, as long as it concerns an animal from which only one gene has been eliminated and nothing else has changed about the animal. But it’s good that the discussion is always there.”

The most important aspect of approval, according to the Greens, is the profit for organ transplantation in humans. “This is also a step on the way to transplanting animal organs to human, but that path to so-called xenotransplantation is still a long way off.”

In his view, the FDA’s approval does not mean that the biotechnological applications of the GalSafe pig will also arrive in Europe. “The EU is generally much stricter in terms of admission. As far as I know, the EU is not investigating this development either.”