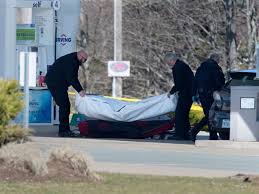 The police did not exclude the possibility that the number of victims will increase even further. For example, some burnt-down houses in cities that the shooter visited were still being investigated.

On the night from Saturday to Sunday, a gunman, a 51-year-old man, opened fire in the city of Portapique. This was followed by a manhunt that lasted more than twelve hours.

The shooter, who was dressed in a police uniform and made his car look like a police car, made victims in several places in the province of Nova Scotia. Among the dead is a policewoman.

The manhunt ended with the shooter’s own death after being shot by Canadian police. The exact cause of death of the man is still under investigation.

Prime Minister Justin Trudeau spoke of eighteen deaths on Monday. That made the shooting the deadliest ever in Canadian history.

Little is known about the perpetrator’s motive. The man’s victims were probably chosen at random. However, the Canadian police reported that they do not assume a terrorist motive.