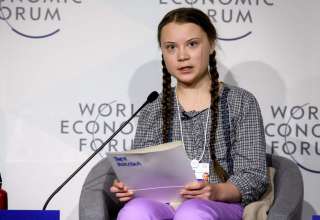 A teenage activist has told the global elite at the World Economic Forum (WEF) in Davos that they are to blame for the climate crisis and that the “house is on fire”.

The Swiss summit is characterised as a discussion of momentous issues like Brexit, world trade and global warming.

Environmentalists have been complaining of alleged hypocrisy after reports that a record number of flights by carbon-spewing private jets would ferry rich corporate bigwigs to talk at the event this year.

Greta Thunberg, a Swedish 16-year-old, whose speech to a climate conference in December went viral, was speaking on a panel with musicians Bono and Will.I.Am when she brought up the issue.

“Some people say that the climate crisis is something that we will have created, but that is not true, because if everyone is guilty then no one is to blame. And someone is to blame,” Greta said.

“Some people, some companies, some decision-makers in particular, have known exactly what priceless values they have been sacrificing to continue making unimaginable amounts of money. And I think many of you here today belong to that group of people.”

Greta, who got a waiver from school to travel 32 hours from her home in Sweden – by train, to keep her carbon footprint down, said she wanted those in the audience to “panic”.

“I want you to feel the fear I feel every day. We owe it to the young people, to give them hope. I want you to act … as if the house was on fire. Because it is,” she added.

There was apparently a short pause in the room before U2 front man Bono started clapping, according to CNN.

The conference centre in the ski resort of Davos is bustled with business executives, presidents and prime ministers, heads of non-governmental organisations, scientists, and artists.

Several hundred environmentalists and political activists have bene protesting and waving green and red flags to demonstrate their opposition to the WEF and capitalism.

Greta too is a keen activist and has been staging weekly sit-ins outside the Swedish parliament. She says she will not stop until her country is in line with the Paris Agreement.

The agreement, that aims to limit global temperature rise this century to 1.5 degrees Celsius, was signed by 195 countries.

In 2017, Donald Trump announced his intention to withdraw the US from the agreement.