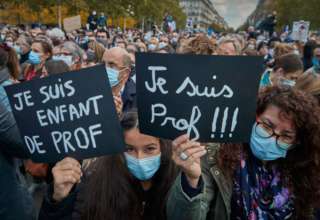 The Islamic group “Collective Against Islamophobia in France” had launched a slander campaign and had pronounced a fatwa on the French teacher who was killed in an attack last Friday, reports the French Gérald Darmanin (Interior) on Monday. He’s investigating whether the group that pronounced the fatwa can be banned.

Darmanin claims to have indications that the Islamist group is “enemy of the state”.

A fatwa is a decree of Islamic clergy telling Muslims how to behave. It may be a ban, but it may also be a call to kill someone.

The father of a high school student would have insisted on the attack. According to the minister, he mentioned the name of the group and the collective then took part in the slander campaign itself. Darmanin wants to dissolve not only this group, but also other Islamist organizations.

According to Darmanin, these organizations are Islamist, writes Le Figaro. Islamism refers to an extremist political version of Islam.

Meanwhile, some 80 police operations are being launched, says Darmanin. According to AFP, homes of dozens of people are being searched.

The history teacher Samuel Pati was beheaded on Friday by an 18-year-old man of Chechen descent, for showing caricatures of the Prophet Mohammed during a lesson on freedom of expression.

The assailant was shot by the police and eleven other people have now been detained on suspicion of involvement. These include relatives of the perpetrator and parents of the teacher’s pupils.

Thousands of Frenchmen have marched for the teacher. There was a wave of the French flag and signs with lyrics such as “Je suis Samuel” (“I am Samuel”) and “Je suis Prof” (“I am a teacher”). The lyrics are references to the slogan “Je suis Charlie” created after the attack on employees of the satirical weekly Charlie Hebdo.

French president Emmanuel Macron has ordered security at schools to be increased.