Home Society Churches were mostly closed for the Orthodox Easter 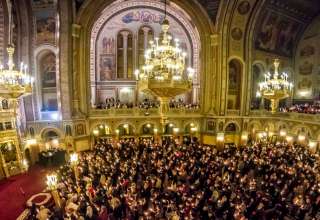 The corona crisis led to empty churches at Orthodox Easter. Believers followed services in many countries via the Internet or television, although there were exceptions.

For example, hundreds of believers in Georgia came to a service in the cathedral in Tbilisi. The authorities had given permission for this.

“I could have stayed home or followed the service on television, but only in this holy church do I find real comfort,” said a 58-year-old believer.

People in Bulgaria could also go to church. Believers had to wear masks there and keep their distance from each other. A 46-year-old man said he came to pray for an end to the crisis. “So that people can take to the streets again.”

The Ecumenical Patriarchate of Constantinople (Istanbul) had ordered that churches be closed and services kept online. Places of worship also remained closed in countries such as Cyprus, Greece, Serbia and North Macedonia.

One of the most prominent Orthodox leaders, Russian Patriarch Kirill, also faced an empty church. He spoke there about the “terrible disease that has hit our people”. That service in the Cathedral of Christ the Savior in Moscow could be followed on television.

There are an estimated 260 million Orthodox Christians worldwide. They celebrate Easter a week after the Protestants and Catholics.