Home Society Catalans protest against imprisonment of their leaders 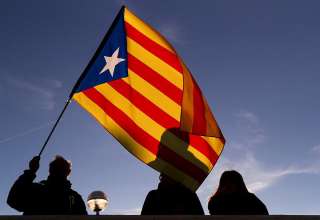 Tens of thousands of people demonstrated in Barcelona last night. According to the Guardia Civil there were 40,000 demonstrators. Seven people were injured in clashes between riot police and demonstrators. Three demonstrators were arrested.

It was the second day that Catalans demonstrated. They are furious with the imprisonment imposed on separatist leaders for incitement around the independence referendum in 2017.

Protesters gathered in front of a building of the Spanish government and sang the Catalan national anthem. Burning heaps lay on the street. The police carried out charges with batons and shot with smoke projectiles. The demonstrators occupy the El Prat airport in Barcelona on Monday. More than a hundred flights were canceled. More than 130 people were injured. One demonstrator lost an eye, another a testicle, reports the Spanish newspaper El País.

The protest is led by the Tsunami Democràtic action group, which called on Telegram to take to the streets via message service. Who the people behind the movement are is a mystery. The Spanish authorities have announced a police investigation into the separatist activists.

Tsunami Democràtic calls for civil disobedience and non-violent protest. They say they are inspired by the demonstrations in Hong Kong. There the demonstrators laid down the airport for two days.

On Monday, the Spanish Supreme Court sentenced nine Catalan separatist leaders to prison terms between nine and thirteen years. One of the convicts announced yesterday that he would bring the case before the European Court of Human Rights. In October 2017, over two million Catalans voted in a referendum on independence, banned by the Constitutional Court of Spain. Images of the vote and the violent action of the police went across the world.

The Catalan parliament declared the northeastern Spanish state independent, but it would never come to that. The Spanish government took over the administration of Catalonia and prosecuted the politicians responsible for the referendum. The nine convicted are seen as the architects of the referendum.