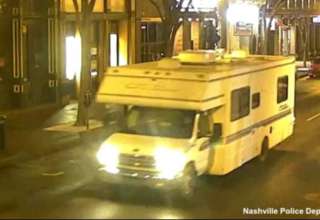 The explosion of Friday morning in the center of Nashville is believed to have been caused by a bomb in an RV. The bomb turned the area into a big mess and left three people slightly injured.

Shortly after the incident, the authorities already informed local media that this might be a deliberate action.

Officers arrived at 6: 00 a.m. on a report of a shooting and found a suspicious vehicle on arrival. From the RV there was a message that a bomb would go off within 15 minutes.

Security camera footage shows how minute calls are made to evacuate. A chief of police said the bomb was about to explode in 15 minutes. The alerting bomb squad was too late to disarm the bomb.

As a result of the explosion, the street became ravaged and façades of buildings collapsed. Pictures show the debris on the road and windows were killed. Customers of the US telecom company AT&T had to deal with malfunctions due to the explosion on Friday, because the company’s technical facilities had been damaged.

The Federal Police Department is investigating the incident. No arrests have yet been made. The mayor of Nashville has called on people to stay out of the area.

Car bombs in the United States are rare. The most famous car bomb attack was the bombing by Timothy McVeigh in Oklahoma City in 1995. 168 people were killed, including 19 children.