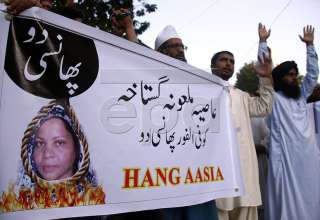 “She is currently in hiding in a safe house, but I understand that she makes things right,” he says. She would be able to go to Germany within two weeks. She would like to go there because our eastern neighbors have a quick family reunification procedure.

Saif Ul-Malook had previously called on the Dutch government to welcome Asia in the Netherlands. Apparently that did not happen but fortunately the Germans are ready to take care of her.

It is certainly an important and good development. Asia Bibi is unsure of her life in Pakistan, a country where Islamic extremists are actually taken the streets. That is terrible for her, but it will give her a decent morale boost our eastern neighbors would like to welcome her with open arms.

A point: in Europe we still generally do not seem to realize that Christians are particularly troublesome in large parts of the world. North Africa, the Middle East – in those regions, Christians are actually systematically prosecuted. If liberal parties suppose it really so important that ‘refugees’ are necessary, then Europe should first and foremost look at Christian refugees – it is precisely they must be taken care of. An additional advantage is that they must be able to adapt relatively easily in Europe.