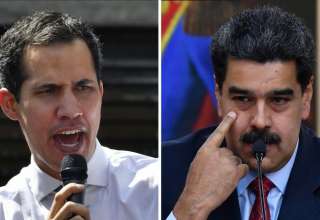 Spain, Germany, France and the UK have warned Venezuelan President Nicolás Maduro that he must call elections within eight days – or they will officially recognise the opposition.

Mr Maduro is under pressure after his rival Juan Guaidó declared himself “acting president” on Wednesday.

Several countries, including the US, already back Mr Guaidó as president.

On Saturday, an attempt by Russia to block a UN Security Council discussion on Venezuela failed.

President Maduro, who has accused Mr Guaidó, head of the National Assembly, of mounting a coup and has cut ties with the US, was sworn in for a second term earlier this month.

But polls were marred by an opposition boycott and allegations of vote-rigging, leading to large-scale anti-Maduro protests.

On Saturday, Spanish Prime Minister Pedro Sanchez wrote on Twitter: “Spain has a responsibility to Latin America… we do not seek to change or remove governments, we want democracy and free elections in Venezuela.”

France and Germany also issued similar statements, in what looked like a co-ordinated demand that elections be held in Venezuela.

UK Foreign Secretary Jeremy Hunt said the election in Venezuela had been “deeply flawed”, repeating his view that Mr Maduro was “not the legitimate leader”.

A UN Security Council meeting is being held to discuss the crisis.

Addressing nations at the meeting, US Secretary of State Mike Pompeo said it was time to “support the Venezuelan people immediately”.

“No more delays, no more games. Either you stand with the forces of freedom, or you’re in league with Maduro and his mayhem,” he said.

Why is Maduro being challenged?

He was re-elected to a second term last year – but the elections were controversial, with many opposition candidates barred from running or jailed.

The National Assembly argues that the presidential position is actually vacant because the election was unfair – and that under the constitution this means that Mr Guaidó, as head of the National Assembly, should take over as acting president instead.

Tens of thousands have held protests over Venezuela’s economic crisis – including an annual inflation rate that the opposition says reached 1,300,000% last year.

Mr Maduro has so far retained the support of the country’s military, but Mr Guaidó has asked them to “put themselves on the side of the Venezuelan people” and back him instead.

How has the international community responded?

The US, more than a dozen Latin American countries, and Canada have backed Mr Guaidó after he said he was the legitimate president.

On Saturday, the US is expected to demand a UN Security Council statement recognising Venezuela’s National Assembly as the country’s “only democratically elected institution”, Reuters reports.

However Russia, a UN Security Council member, has condemned foreign support for Mr Guaidó, saying it violates international law and is a “direct path to bloodshed”.