Home Politics US is abandoning Afghanistan leaving thousands of proxies behind 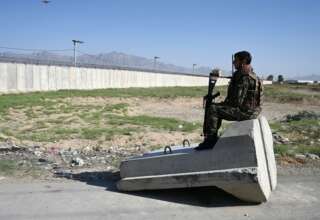 Americans are very happy with the return of soldiers who were stationed in Afghanistan. But with each soldier leaving, the worries of Afghans continue to grow. Because the Islamic Taliban movement is seizing the moment to strike. “We see that they have conquered many districts in a short time.”

Especially in northern Afghanistan, the Taliban are on the rise. This weekend, heavily armed fighters conquered several districts. They were under the control of the Afghan army for a long time. But when the violence erupted, hundreds of soldiers fled into neighboring Tajikistan.

The news is hitting Kabul, the capital of Afghanistan, hard. “People who have enough money are now leaving the country”, tells resident Abdul Sediq Joyenda to Reuters news agency. “Because the American troops are gone and people who have nothing to do with the government suddenly pick up their weapons.”

According to Ezmarai Wafa, a watchmaker from the capital, the Americans were an important stick behind the door against the Taliban. “We are afraid that they will now seize power across the country. Ever since the announcement that the United States was about to leave, our lives have been negatively affected.”

At present, a third of Afghanistan is in the hands of Islamic militants. But in many places there is still a fierce battle for control.

According to the Afghans, It is no coincidence that the Taliban are advancing now that the Americans are gone. Key moment is the recent departure from Bagram Air Force Base, an hour’s drive from the capital Kabul. For more than 20 years, the base was the nerve centre of the American missions in Afghanistan.

The reason for the American presence in Afghanistan is the attacks of 11 September. Together with NATO allies, America is fighting al-Qaeda terrorist group and the Taliban. Over the years in Bagram alone stayed 100,000 Americans.

But since this week, Afghan soldiers have been standing guard around the huge Air Force Base. They are on their guard because the threat from the Taliban is lurking more than ever. That’s why in many places civilians help out and also pick up guns.

Earlier this week, US president Biden was questioned about the Taliban’s advance. Is the timing of bringing back American soldiers wise now? “The Afghans will have to solve it themselves with the Air Force they have. We’re gonna help maintain it.”

This involves air support and drones for intelligence gathering. They will be flown in from military bases outside Afghanistan. For the time being, 650 American troops remain in the country to secure the airfield and the American embassy. Chances are that they too will return home this year.