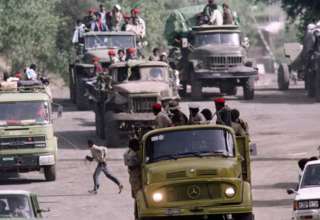 The US government imposes extensive restrictions on economic and security support to Ethiopia because of the atrocities in Tigray. Visa restrictions are also introduced for current or former Ethiopian or Eritrean government officials who are believed to be responsible for the crisis in the North Ethiopian region.

US Secretary of State Antony Blinken said that the actions of the United States are being taken to press for a resolution of the crisis. “The time for action by the international community is now,” says Blinken.

As a result of the heated battle between the Ethiopian government army and the Tigray People’s Liberation Front (TPLF) that previously ruled the region, thousands of people have died and hundreds of thousands have fled since November.

Troops from neighboring Eritrea that had intervened in the conflict began to withdraw in the spring. According to Amnesty International, they killed hundreds of civilians in the city of Aksum last November.

In March it became clear that there will be a joint investigation by the United Nations and Ethiopia into alleged war crimes during the conflict. Prosecutors in Ethiopia are investigating these allegations, and now claim that Eritrean troops killed 110 civilians in Aksum at the end of November.