Home Politics Unbelievably pathetic Gina McCarthy: “The US is back in the game” 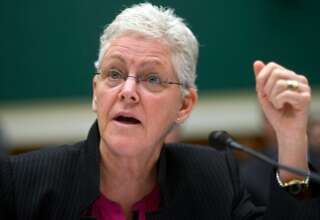 The United States wants to show at the international climate summit COP26 that it is once again taking the lead in tackling climate change. Climate Representative John Kerry said the goal is” to have significantly increased international ambition by leaving Glasgow”, so that the world is better able to limit global warming to 1.5 degrees compared to pre-industrial times.

Kerry pointed to the “heavy” delegation sending his country to the UK for COP26. It consists of heads of departments and dozens of members of Congress. President Joe Biden is expected on Monday and flies back to the United States a day later. Unlike his predecessor Donald Trump, he sees tackling climate change as one of his priorities.

Climate advisor Gina McCarthy told the Press that Biden and his top officials will send a clear message at COP26.

“The US is back in the game. We’re back. And we hope to mobilize the world to tackle the climate crisis.”

Despite Biden’s great international climate ambitions, his domestic climate agenda is hard to get off the ground. In the run-up to COP26, the Democrat failed to guide ambitious climate plans through the U.S. Congress. The plans are not supported by the Republicans and some Democrats are also opposed.

Climate policy has been politically sensitive in the US for decades. President Bill Clinton supported the 1997 Kyoto Protocol. His successor George W. Bush then withdrew his hands from that agreement. Under President Barack Obama, the US joined the 2015 Paris climate agreement. His successor Donald Trump later reversed that. That decision was subsequently reversed by Biden.