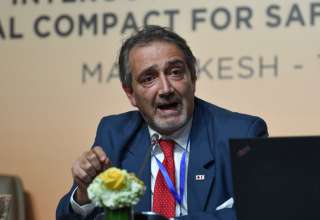 The president of the International Federation of Red Cross and Red Crescent Societies (IFRC) on Monday attacked Switzerland’s credibility on humanitarian issues over its decision to delay signing the UN migration pact.

Speaking to the press after the non-binding pact was approved by over 160 countries in Marrakech on Monday, IFRC president Francesco Rocca described the decision by Switzerland to hold off on approving the pact as “painful”.

“We trusted Switzerland when it was leading the negotiations. Now everything has changed,” said Rocca.

Switzerland provided diplomatic support during the 18-month negotiations for the new Global Compact for Safe, Orderly and Regular Migration.

In October, the Swiss government said it would approve the pact, but in late November it backtracked and said it would hold off on doing so until the parliament had discussed the issues involved.

Rocca said Switzerland’s “credibility” when it came to leading humanitarian discussions has now been seriously “put at risk”.

But countries including the United States, Australia, Hungary and Poland refused to put their name to the document over fears sovereignty could be affected despite UN guarantees that the pact is intended as a non-binding framework on cooperation.

The Swiss upper house, the Council of States, in late November voted that the parliament, not the government should be given the power to say whether Switzerland will sign the migration pact. The lower house, the National Council is expected to expected to make the same demand on Tuesday.