Home Politics UK needs to get its act together before Brexit vote, Juncker says 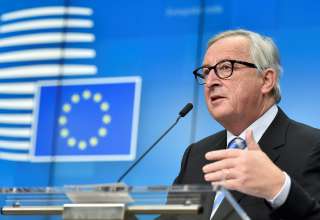 It is not up to EU to resolve problems before MPs vote on May’s deal, London told

Jean-Claude Juncker has told the UK to “get its act together” in the run-up to the delayed House of Commons vote on Theresa May’s Brexit deal.

The European commission president said the EU could not be expected to resolve the problems that continue to make it likely the British government will suffer a heavy defeat.

“I find it entirely unreasonable for parts of the British public to believe that it is for the EU alone to propose a solution for all future British problems,” Juncker said in a wide-ranging interview with the German newspaper Welt am Sonntag. “My appeal is this. Get your act together and then tell us what it is you want. Our proposed solutions have been on the table for months.”

May is set to put her deal, including the contentious Irish backstop, to MPs in the week beginning 14 January, following a week of debate in the Commons.

The prime minister pulled a planned vote earlier this month when it became clear the government was likely to suffer a heavy defeat.

She then promised to secure “legal and political” assurances that the backstop – which would keeping the UK in a customs union with the EU to avoid a hard Irish border – would only betemporary, should it need to be triggered.

The backstop would come into force at the end of the transition period, during which the UK effectively remains a member state but without a decision-making role, unless an alternative arrangement has been agreed.

The EU’s 27 leaders, however, offered May little hope of any significant sweetener to the deal at a summit earlier this month. Juncker’s comments will be a fresh blow to Downing Street’s hopes of a game-changing last-minute concession.

Asked whether he would recommend a second referendum to get past the logjam in parliament, Juncker said it was up to the British people to decide. “If the House of Commons backs the withdrawal agreement in mid-January, then we should begin preparations for the future relationship between the United Kingdom and the European Union the very next day and not wait until after the official withdrawal date of 29 March.

“I have the impression that the majority of British MPs deeply distrust both the EU and Mrs May. It is being insinuated that our aim is to keep the United Kingdom in the EU by all possible means. That is not our intention. All we want is clarity about our future relations. And we respect the result of the referendum.

“I am working on the assumption that it will leave, because that is what the people of the United Kingdom have decided.”

The international trade secretary, Liam Fox, an ardent Brexiter in the cabinet, said on Sunday that there was a 50/50 chance the UK would not leave the EU on 29 March if MPs rejected May’s Brexit deal next month.

Fox told the Sunday Times it would only be “100% certain” if MPs back the deal, and a second referendum “would shatter the bond of trust between the electorate and parliament”.

The EU 27 would be prepared to offer an extension to the two-year negotiating period allowed under article 50 of the EU’s treaties to allow for a second referendum, but there is a growing frustration in Brussels over the UK’s tortured exit.

The focus in Brussels is instead on the existential threat posed by the rise of populist governments elsewhere in Europe. With May’s elections to the European parliament in mind, Juncker used his new year interview to appeal to the EU’s established political parties not to pander to anti-immigrant populists, and instead support the commission’s proposals on dealing with future migration.

“Those who run after the populists will only be seen from behind”, he said. “We must not imply that the populists are right. We have to show them up for what they are by making it abundantly clear that they are just loud and do not have any specific proposals to offer on solving the challenges of our time.”