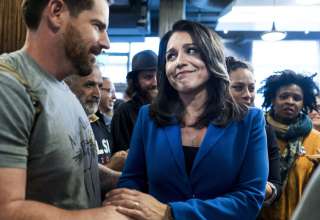 The US presidential race is officially between two people on the Democratic side. The third candidate, the virtually invisible Hawaiian delegate Tulsi Gabbard, announced the end of her campaign on Thursday.

The race is now officially only between Joe Biden and Bernie Sanders. Gabbard was unable to play a significant role during the campaign.

The Hawaii delegate has so far won only two delegates, both from American Samoa, during her primaries.

She expressed her support for former Vice President Joe Biden on Thursday, who is on track to defeat his only surviving opponent, Socialist Bernie Sanders.

“Although I disagree with the Vice President on every front, I know he has a good heart and is motivated by his love for our country and the American people,” she said in a statement by email.

Gabbard is an Iraqi veteran, who mainly made headlines during the campaign due to struggles. She accused the Democratic Party of manipulating the primaries and threatened to boycott debates.

She mainly received support from alt-right, white nationalists, Russian state news media and the libertarian movement and after November she was no longer eligible to participate in the debates.