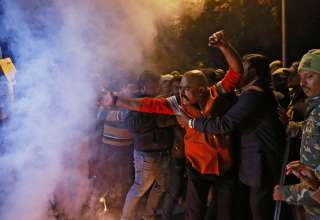 The Trump administration wants to extend the powers of the concealed federal agents who resided in Portland, Oregon last week against local government officials.

The unidentifiable officers arrested protesters and disposed of them in unmarked cars. Critics fear a new and “unconstitutional” secret police.

“It’s about keeping our communities safe,” Mark Meadows, White House chief of staff told Fox News on Sunday. “It is unacceptable if the communities are not safe. President Trump works closely with Justice Secretary Barr and Secretary of Homeland Security Wolf. There will be a measure later this week. “

The men in camouflage suits belong to a new “task force” that consists of about two thousand agents from different federal services: a command unit of the border police, aliens police ICE and the security service of federal buildings. This law enforcement agency, dubbed PACT (Protecting American Communities Taskforce), is a result of a presidential decree formed early this month to protect the statues attacked by Black Lives Matter protesters.

Now Meadows says he wants to expand that job description. In addition to Portland, he also named Chicago and Milwaukee, and “every city in the middle of America,” as places where agents can be deployed.