Home Politics Trump on removing statues: ‘The left wants to dishonor our heroes’ 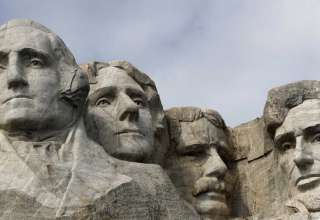 President Trump lashed out at ‘anti-racism’ protesters who plead for the removal of statues in a speech. “A brutal campaign to erase our history,” said Trump at the foot of Mount Rushmore, the granite mountain wall in the state of South Dakota carved into the portraits of four American presidents.

Trump delivered the speech the night before Independence Day. There were approximately 7,500 spectators, mostly supporters of the President. There was also a fireworks show.

The Black Lives Matter movement calls for the removal of statues of once prominent people who have ‘benefited from slavery’. This discussion is also taking place in European countries, for example about Jan Pieterszoon Coen and the Belgian king Leopold II.

Trump described this movement as a “scratch culture.” According to him, the leftist community “wants to dishonor our heroes, polish our values and indoctrinate our children.” He also referred to the four presidents on Mount Rushmore. “This movement openly attacks the legacy of everyone on this mountain.”

He also announced the construction of a National Garden of American Heroes, a large park with statues of “the greatest Americans ever.”

His supporters raved about Trump’s speech. “This is going to be one of the best Independence days of my life,” said one of them.

Opponents of the President expressed concerns about the event’s possible spread of the coronavirus. “I think the president is setting a bad example,” said a man with an anti-Trump flag.

There are also concerns from the original inhabitants of the region around Mount Rushmore.

“The president is putting members of our tribe at risk for a photo in one of our most sacred sites,” said a local leader.

The area around Mount Rushmore has been taken from them, according to many Native Americans.

With more than a hundred people, they protested the Trump meeting. Fifteen were arrested for blocking a road and refused to leave.