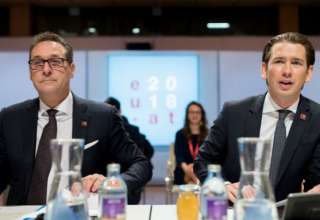 Buoyed by healthy polls and a booming economy, Austria’s right-wing coalition is riding high on an extended political honeymoon a year after joining forces to push their anti-immigration agenda.

But the government has faced criticism abroad — notably for its perceived closeness to Russia — and it may yet face some roadblocks at home as divisions emerge and policies risk fraying support among the working-class part of its base.

“A real asset has been that they have been able to continue with their campaign messages in government,” said political analyst Thomas Hofer, in contrast to horse-trading that characterised previous right-left “grand
coalitions”.

The OeVP and FPOe have made harmony their watchword, as have Kurz and Strache.

At one press conference earlier this year where the duo were finishing each other’s sentences, Strache said: “Even I’m surprised at how quickly and brilliantly we’re working”.

“The effort that they’ve made to appear as united as possible is very popular with the public,” said political scientist Fritz Plasser.

Kurz’s polished style and the self-restraint shown by Strache have also helped the two men.

Part of that popularity is due to the economy. With growth of 3 percent expected for this year and one of the eurozone’s lowest unemployment rates at 5.6 percent, the government rode a wave of European economic growth.

Despite generous tax break for families and pension rises, this year the government looks set to eliminate its budget deficit, a year earlier than planned.

Civil servants can also look forward to a pay rise of 2.8 percent, with most other workers receiving rises of more than 2.5 percent — even up to 3.5 percent for metalworkers.

Anti-immigration rhetoric was a key part of the platform of both right-wing parties in last year’s election and the government has been keen to live up to its promises.

Boycotting the UN’s migration pact, increasing expulsions of rejected asylum seekers and cutting benefits for refugees — the government has rarely missed an opportunity to burnish its tough credentials. As the Kurier daily pointed out, many say the OeVP has “sacrificed its Christian-democratic values” along the way, as well as annoying some businesses who blame deportations for the loss of apprentices they need to plug labour shortages.

Since last year’s election the opposition has struggled to be heard. The main opposition SPOe has also lacked unity, said Hofer, and was dealt a blow by the departure of its leader to run for European Parliament elections in May. Even a law extending the maximum working week to 60 hours (or 12 hours per day) didn’t spark enough opposition to trouble the government.

Several thousand people take part in protests outside the Chancellor’s office every Thursday and organisers plan an anti-government demonstration for Saturday in Vienna to mark the administration’s first anniversary.

Hofer cautions the 12-hour workday reform “was not easily swallowed by the FPOe” due to its more working-class voter base, even if for now any disagreement in the alliance has been kept behind closed doors.

From Russia with love

While at the top of the party, the FPOe’s ministers have tried to present a professional image, there has been a steady supply of embarrassing stories about party members caught making sexist, anti-Semitic or racist remarks. And its ministers have not escaped criticism either.

Interior Minister Herbert Kickl, one of the party’s chief ideologues, had barely been appointed when he sparked a row by saying he wanted to “concentrate” asylum-seekers, employing a word widely associated with Nazi
camps.

Kickl is also at the centre of a row over raids on the BVT domestic intelligence agency in February during which numerous documents were seized, raising fears among Austria’s Western partners about the possibility of leaks
to Moscow.

The FPOe has a co-operation agreement with President Vladimir Putin’s United Russia party.

Foreign Minister Karin Kneissl — who is not a member of the FPOe but was nominated by the party — also raised eyebrows by inviting Putin to her wedding over the summer.

Images of her curtseying to the Russian leader and enjoying a waltz with him raised questions over her neutrality.

Closer to home though, the FPOe has cheered the emergence of similar populist movements in other parts of Europe and has enthusiastically echoed rhetoric used by nationalist Prime Minister Viktor Orban in neighbouring
Hungary.

That has led to some of the rare awkward public moments for Kurz and Strache, with the chancellor distancing himself from his deputy.

“Don’t mistake harmony on the outside for harmony on the inside,” said Hofer. “The European elections will be a test for them, as obviously the two parties’ messages will differ.”