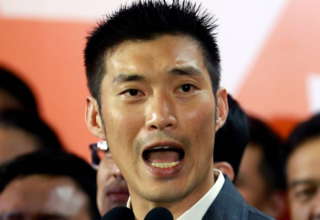 Thailand opposition Leader has been charged with defamation of the monarchy. That happened two days after Thanathorn Juangroongruangkit criticized the county’s COVID-19 vaccination strategy on Facebook.

Thanathorn Juangroongruangkit then said that the government relies too much on the company that produces the vaccines. That company is owned by King Vajiralongkorn.

“Thanathorn has distorted facts and created misunderstandings among the people,” said a close associate of Prime Minister Prayuth. “He has dishonored the monarchy, which has upset people who love the monarchy.”The prime minister is threatening to prosecute anyone who criticizes the vaccination strategy with “twisted” information.

Thanathorn hasn’t responded to the charges yet. His movement, the Progressive Movement, says that there is no slander or insult. “It is clear that the article of the law on the desecration of Majesties is once again being used as a political instrument.”

The political movement was founded last year, after the Thanathorn political party was dissolved by a court. Mr Thanathorn himself may not hold a post of minister or other political office for ten years. The new charge could put him in jail for between three and 15 years.

Yesterday, a former official for insulting the King was sentenced to 43 years in prison. According to the court, the approximately 65-year-old woman had committed 29 counts of Majesties desecration in Facebook and YouTube. At first, the court wanted to give her 87 years. Because she confessed, the sentence was halved.