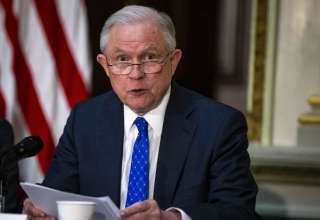 Donald Trump has fired his justice minister, Jeff Sessions. With that, he may put a spanner in the wheel of the investigation into Russian interference in his election in 2016.

The president would have demanded the resignation of Sessions before, but waited until Tuesday’s election, not to damage the Republicans’ chances.

Sessions was the first senator to support Trumps candidacy for the presidency. The minister’s post was his reward and he used that position for a jerk to the right. He ordered prosecutors to demand maximum punishments and agitated against the legalization of marijuana in some states. But he aroused Trump’s anger by withdrawing his hands from the Russia investigation shortly after his appointment and by instructing Deputy Minister Rod Rosenstein.

Sessions officially changed because he himself was part of the campaign. But it also turned out that he had been silent to the Senate Committee, who had examined his appointment as minister, that he himself had had contacts with the Russian ambassador.

….We thank Attorney General Jeff Sessions for his service, and wish him well! A permanent replacement will be nominated at a later date.

Trump showed time after time that he had expected Sessions to protect him from investigations into the Russian connection, which became more and more serious. After Trump dismissed FBI director James Comey in May 2017 because he did not say how to conduct the Russia investigation, Deputy Minister Rosenstein appointed a special prosecutor, Robert Mueller. He is now investigating, besides the Russian involvement, also any obstruction of the legal process by Trump. For the past year and a half, he has been making Trump employees, and Trump itself, out of the public, the fire. Several former employees have been prosecuted.

The departure of Sessions can have major consequences for the Russia investigation. After all, his successor as minister does not have to stay out of it. A spokesman for the ministry told the Washington Post that the temporary replacement of Sessions, his chief of staff, Matthew Whitaker, has already taken over the supervision of it from junior minister Rosenstein. It seems clear that Trump will make clear to the final successor how he wants to exercise that supervision.

The appointment of that successor must be approved by the Senate. From January 3, when the newly elected Senate opens on Tuesday, the Republican majority has been strengthened there. And some Republican senators who are critical of Trump and fully defended the independence of the Russia investigation have left on that date.