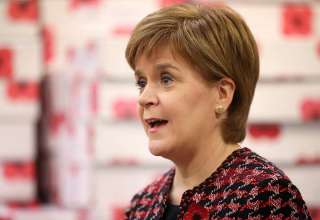 Scotland has been a bystander, in many ways, in the last two years of the Brexit saga. Now, with the Brexit endgame fully underway, Scottish political dynamics are proving to be an important part of the unfolding drama at Westminster and getting sharper, too, back home in Scotland.

“If May’s deal with the EU – contrary to expectations – is voted through in December, then Brexit is highly likely to happen, even if some MPs might fight a rearguard action to force a ‘people’s vote’. In Scotland, Brexit going ahead will be received very negatively.”
– Kirsty Hughes, Director of the Scottish Centre for European Relations

Last week, Scotland’s First Minister Nicola Sturgeon, was at Westminster liaising with the other opposition parties and ‘remain’ Tory MPs. Sturgeon’s aim was to push for an agreed opposition strategy as to what happens if the Commons does indeed vote down the Brexit deal.

The Scottish National Party (SNP), with its 35 MPs, is the third largest party at Westminster but receives relatively little attention in the UK media. In a Brexit vote that could end up very close – if the massed ranks of Brexiteer Tory MPs threatening to vote May’s deal down dwindle – SNP votes will matter. But, so far, there is no agreed strategy.

Labour’s Brexit position under Jeremy Corbyn has been fudged for a long time. While Labour voters and party members are solidly ‘remain’ and in favour of another referendum on the deal – the so-called ‘people’s vote’ – Corbyn has stuck to his goal of provoking another election. Labour’s party conference in October kept the option of possibly supporting a ‘people’s vote’, perhaps with a ‘remain’, on the table. But the expectation is that, should Corbyn swing behind such a vote, he would only do so after an attempt at a no-confidence vote fails at Westminster. And he might not even then.

So, Labour’s position in this crucial endgame remains fudged and unpredictable. Corbyn has called for a permanent customs union with the EU. Surely the withdrawal agreement ‘backstop’ should look quite attractive to him? But instead Corbyn, for now, is insisting the deal doesn’t pass Labour’s ‘six tests’ and that Labour MPs will vote against.

It’s not a surprise then that Sturgeon’s Westminster visit didn’t produce instant results. The SNP itself has, until recently, been rather passive in the face of Brexit – positioning its political fight in the last 18 months more around the ways in which the Brexit process has undermined the devolution settlement than on opposing Brexit.

The SNP has consistently stated its preferred outcome is to stay in the EU. But its main focus, apart from devolution, has been calling for a compromise of a ‘soft’ Brexit. That would entail the UK staying in the EU’s single market and customs union, or failing that they want Scotland to get a differentiated deal and stay in the single market (the latter rejected by the UK government in March 2017).

In the last month, the SNP has finally shifted more onto the front foot in opposing Brexit. At their party conference in October, Nicola Sturgeon came out in support of a ‘people’s vote’. And at Westminster last week, she insisted her preferred option is to halt Brexit but with the alternative being remaining the ‘soft’ customs union/single market option.

Back home in Scotland, Scottish Tories accuse her (inaccurately) of wanting a ‘no deal’ Brexit to help her push for independence. And on the neuralgic issue of fish and access to waters, Scottish Tories and the SNP continue to trade accusations on who is selling out Scottish fishermen. Yet in Scotland, support for Remain crosses the independence/unionist boundary. SNP, Labour, Lib Dem and Green voters are all strongly pro-Remain and in favour of a ‘people’s vot’e – only a majority of Scottish Tory voters back Leave.

Back at Westminster, it’s not in fact clear that there is a majority at Westminster for Sturgeon’s compromise ‘soft’ Brexit (a customs union amendment was voted down narrowly in the summer). And it would be extraordinary if, in the end, the opposition parties drove Brexit through, should May’s deal be rejected, rather than halting it. But Labour is key here – and still unpredictable. A ‘people’s vote’ might have more chance of passing if Labour backed it, as some Tory Remainers would support that but not an election.

So where does this all go next? If May’s deal is voted down, there will be political and economic turmoil. Another EU referendum – and a request to extend article 50 to hold it – might prove the route ahead. Or, if Westminster rejects all options – the deal, an election, another vote – the crisis will intensify. Could May survive – and could an election really be avoided?

If May’s deal with the EU – contrary to expectations – is voted through in December, then Brexit is highly likely to happen, even if some MPs might fight a rearguard action to force a ‘people’s vote’. In Scotland, Brexit going ahead will be received very negatively.

If Brexit goes ahead, the independence debate – which remains the key political divide in Scotland – will burst back into life. One recent poll suggested that if Brexit happens, support for independence would go up to 50% and that if it were a ‘no deal’ Brexit, it could go up to 52%. But the political dynamics here are quite unpredictable. After two years of groundhog day, Brexit actually happening will be a big political shock across the UK and especially in Scotland.

Nicola Sturgeon did, of course, call for a second independence referendum in the face of Brexit in March 2017. Theresa May responded ‘no, not now’ and then proceeded to call the 2017 general election where not only did she lose her majority but the SNP also lost 21 of its 56 seats. The SNP remained the largest party in Scotland but Sturgeon had taken a knock – and talk of an independence referendum was put on the back burner with a commitment to look at timing again once a Brexit deal was done.

Until now, many have argued Sturgeon would continue to push the timing of another independence vote into the future; partly waiting until support for independence went up, partly unsure how to overcome May’s ‘no, not now’ refusal of another vote.

But pressure is building up in parts of the SNP and in the independence movement. If Brexit goes ahead, Scottish politics will face its own crossroads.