Home Politics Salvini: Poland and Italy will be part of the new spring of Europe 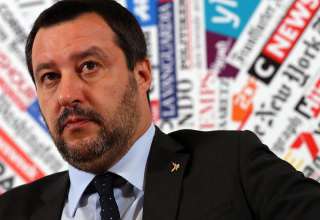 Italy’s far-right Deputy Prime Minister Matteo Salvini was in Warsaw on Wednesday to discuss the formation of a eurosceptic alliance with the leader of Poland’s ruling party, Jaroslaw Kaczynski.

“Poland and Italy will be part of the new spring of Europe, the renaissance of European values,” he told reporters during a press conference with Poland’s Interior Minister Joachim Brudzinski.

“The Europe that will come to form in June (after May’s European Parliament elections) will lead us all than the one that exists today and is run by bureaucrats.”

Salvini said he wants Poland and Italy to work together on a new Europe.

The alliance’s proposed objectives include uniting eurosceptics across the continent ahead of the European Parliament elections, set to take place in May.

Kaczynski, who runs Poland’s ruling Law and Justice party (PiS), has clashed with Brussels on a range of issues and said the EU should stop meddling in his country’s affairs, according to Reuters.

PiS spokeswoman Beata Mazurek said on Twitter that talks between Salvini and Kaczynski, “opened the way for further contacts on speeding up the development of EU countries and providing the EU with an appropriate and strong position on a global scale”.

The EU elections are shaping up to become a pivotal battleground between groups that are liberal and pro-European Union, and populist eurosceptics, lead by Salvini.

Salvini said the EU elections were vital for creating a “reformist” bloc that could overhaul the Brussels institutions from within, Reuters added.

Salvini, who heads Italy’s anti-immigration Northern League party, has often blamed EU lawmakers for allowing the refugee crisis to spin out of control.

Salvani’s ties to Russia could become his main hurdle in garnering support from Poland’s conservative politicians — like many in Poland, Jaroslaw Kaczynski is distrustful of Moscow.

“Salvini is one of the most openly pro-Kremlin leaders in Europe… (while) Kaczynski has been trying to show PiS’s pro-EU face recently,” said Edit Zgut, a political scientist at Warsaw University’s Centre for Europe.

Zgut told Euronews that Salvini and Kaczynski could – for now – be on the same page when it comes to issues such as national sovereignty and rejecting multicultural, open societies.

However, Zgut warned that Salvini’s pro-Kremlin views are not the only issues that could come between Italy and Poland.

“It is hard to imagine that that far-right, anti-EU, Eurosceptic parties can be united and compete with the European People’s Party (EPP) in the long-term,” Zgut told Euronews.

“The European populist right remains heterogeneous, and there are serious policy differences between them, such as the idea of a mandatory relocation system,” said Zgut.

Zgut also said that EU budget-related issues could raise tension between Italy and Poland, given that Salvini is against extensive EU cohesion funds to CEE that is a key interest of Poland.

Over the past few years, Italy has seen the brunt of refugees fleeing North Africa via the Mediterranean Sea, receiving 67% of all EU migrant arrivals in 2017, taking in 119,000 in total. However, that number dropped significantly in 2018 with only 23,000 migrants landing on Italian shores.

Salvini said Wednesday that a Carabinieri police operation to detain 15 people suspected of aiding illegal migration and instigating terrorism showed Italy was getting tough, according to the Italian news agency ANSA.

“Forget letting others land here or going to get them with boats and aeroplanes, we are working to send them back home,” Salvini said on Twitter. “Traffickers and terrorists: get back home!”