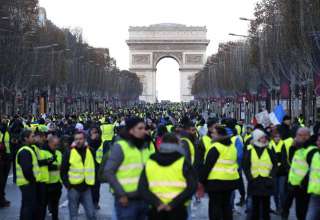 French police have arrested hundreds of people and arrested more than 500 in and around Paris, where some 8000 demonstrators are on the streets. They were in possession of masks, catapults or hammers. The police think they are rioters and not demonstrators. They have been arrested on suspicion of ‘gathering in preparation for violence against persons or vandalism’.

In other places in the French capital, ‘gilets jaunes’ have also been gathered, such as on the western périphérique (ring road) at the Porte Maillot access point. In total, the number of demonstrators in France is estimated at 31,000, State Secretary for Home Affairs Laurent Nuñez said on French TV. The number of demonstrators is expected to increase. The situation in Paris seemed initially quiet, but during the afternoon there were more and more skirmishes and collisions between demonstrators and police.

In the meantime, the American president Donald Trump has established that the Paris climate agreement is not doing so well for France. “Protests and revolts throughout France. People do not want to pay large sums of money, many of which go to third world countries (which are led in a dubious way) to preserve the environment, “says the American president. According to Trump, there are among the people who take to the streets in France, protesters who call ‘We want Trump’.

The dissatisfaction that drives the movement of the yellow vests may well be the same as that from which the Brexit and Trump originated. That it is warned for extreme violence, for vandalism and even death, is not so strange for the French. France has a tradition of violent street protest. From the revolutions of 1789, 1830, 1848 to the student revolt of May 1968, at first glance, there is not much news under the sun: In France, changes are accompanied by severe shocks and outbursts.

But the differences between the yellow vests and previous eruptions are much more remarkable than the similarities. “I really do not know anything that looks like it”, says historian Danielle Tartakowsky, expert on social movements. For example, it is not a martyr, as revolts of French farmers against the taxes of their lords in the Ancien Régime were mentioned. A comparison with very recent protests in 2016 against a reform of the labor market is also flawed. Then the rioters were extreme-left activists, ordinary housefathers like now were not in between. It also has nothing to do with May ’68, according to Tartakovsky. “The students from that time wanted a different society. Most yellow vests want a fairer income distribution. ”

The sociological characteristics of the yellow vests – working poor and lower middle class – the role of social media and the lack of organization, make the yellow vests absolutely unique, Tartakowsky thinks. “And they are not foreseen by anyone. But we know the breeding ground only too well: the jilets jaunes are the product of a society that disintegrates and where there is a great mistrust of politics, institutions, media and trade unions. And that’s the engine behind Brexit, Trump and populism. “