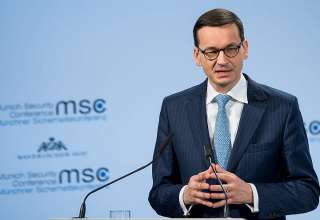 Poland’s prime minister says he wants to see more workers return from the UK to help its domestic economy grow.

Mateusz Morawiecki told the BBC that “more and more are coming back and I’m pleased about that because there is a low level of unemployment… Give us our people back”.

But he said people who want to stay in the UK should be allowed to, “and be treated exactly as they are now”.

He said Prime Minister Theresa May had given him that commitment.

Speaking at the World Economic Forum, in Davos, Mr Morawiecki said there was a low level of unemployment in Poland and 5.5% GDP growth. “So I would hope that many Poles would come back to Poland,” he said.

Mr Morawiecki is desperate for the UK to avoid a hard Brexit – an outcome he says would be damaging for the UK, Poland and the whole EU.

Poland has been critical of the way the EU has handled the Brexit negotiations. Its foreign minister, Jacek Czaputowicz, has recently suggested that the Irish backstop should be time-limited to five years.

The backstop would keep the UK in a customs union with the EU until future arrangements are agreed to avoid a hard border on the island of Ireland.

This was seen by many in the UK as a crack in the solidarity of the EU27’s negotiating position and was dismissed by the European Commission.

The Polish prime minister said his minister’s comments were an attempt to be more creative in the fight for any compromise that avoided a hard Brexit.

However, he told the BBC that the negotiation was now over and the ball was now in Mrs May’s court.

I asked if he shared the emerging consensus among business and political leaders that no-deal was getting less and less likely.

“I do get that sense, I see that sterling is strengthening and that may be because of this,” he replied.

His comments follow remarks by the former chancellor George Osborne, who told the BBC that a delay of Brexit was now the most likely outcome.

However, International Trade Secretary Dr Liam Fox warned that political and business leaders gathered at Davos were becoming far too complacent in assuming that a no-deal Brexit would be averted and that could prove costly for them as well as the UK.

“Some countries believe that no-deal is not possible so think – why should I put the work in? It’s my job to remind them that it is a possibility and you need to get that work done.”