Home Politics North Carolina is allowed to lag behind the vote 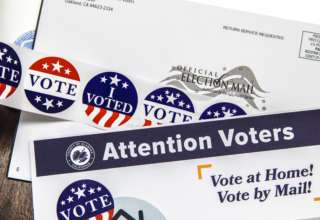 The Supreme Court of the United States has ruled that the extra time for counting votes in the state of North Carolina remains unaffected, against the will of president Donald Trump and the Republicans. In a similar case concerning the crucial swing state Pennsylvania, the Republicans tried to force an accelerated verdict, with the Supreme Court also giving them nothing. In the latter case, the newly elected Supreme Court, Amy Coney Barrett, abstained from judgment.

With the judgment of the country’s Supreme Court, an earlier judgment of a lower court remained valid. The campaign team of president Donald Trump, the National Republican Party administration and Republican officials in North Carolina had hoped that the Supreme Court would draw a line.

The North Carolina Election Committee, due to possible delays in postal delivery by the US Postal Service, allows letter consent with a postmark of election date November 3 to be counted until 9 days after the election.

In Pennsylvania, the current rules allow letter voting to be counted until three days after the elections. The Republicans also want that extra time for voting off the table and are currently suing the Supreme Court for that.

That, at the request of the Republicans, refused to expedite the judgment in that case. That decision was made by eight judges, in the ratio of 5 to 3. The newly appointed conservative Supreme Court Judge Amy Coney Barrett denied judgment because she didn’t have time to study the case.

There are numerous lawsuits about postal voting across the country. As a result of the pandemic, more Americans than ever cast their votes by letter. President Trump, in spite of what experts say, has often stated that voting by letter encourages election fraud. According to his critics, Trump anticipates a possible loss and thus tries to exclude voters to his advantage.