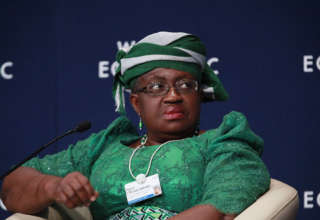 The Nigerian Ngozi Okonjo-Iweala has been appointed new head of the World Trade Organisation (WTO). She is the first woman to hold this position since the establishment of the WTO in 1995.

At a digital meeting, all 164 member states agreed to the nomination of Okonjo-Iweala. Recently, the last great hurdle was already taken, when the United States formally declared its support for the African.

Under former President Donald Trump, the US continued to cause problems in the search for a new boss for the international referee for trade disputes. While Okonjo-Iweala was widely supported by WTO members, the White House blocked its appointment because it preferred the other remaining candidate, the South Korean Yoo Myung-hee.

Under the leadership of Trump, the US was increasingly less and less concerned with the WTO. The refusal by the US government to appoint new members to the organisation’s main dispute settlement Board effectively paralysed the body.

The 66-year-old Okonjo-Iweala was previously minister of Finance and Foreign Affairs in Nigeria. She also made a career as a development economist and executive for the World Bank.

The top position at the WTO was unexpectedly released in August, when Brazilian Roberto Azevêdo resigned a year before his term expired. Initially, the name of the Dutch minister Sigrid Kaag (Foreign Trade) also circulated as a successor, but it indicated that it was not available.