Home Politics NATO keeps out of the Nagorno-Karabakh conflict 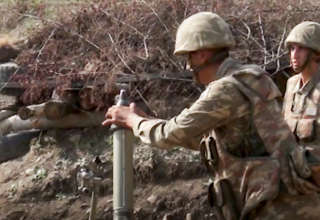 On 21 October, Anadolu Agency reported that NATO Secretary-General Jens Stoltenberg had a visit from Armenian President Armen Sarkissian.
At that meeting Stoltenberg would have indicated that the military alliance is not taking sides in the Nagorno-Karabakh conflict, which rekindled at the end of last month. The German press agency, DPA, also reported that NATO wants to stay neutral.

Sarkissian was in Brussels hoping that NATO or the EU would call on Turkey and Azerbaijan for their involvement in the conflict.

#NATO: We are not a party to the conflict in Nagorno-Karabakh

▪️ NATO Secretary General Jens Stoltenberg and #Armenia’s President Armen Sarkissian met at NATO headquarters in Brussels.
▪️ Stoltenberg explained that he reminded Sarkissian that NATO is not a party to the conflict. pic.twitter.com/4yGcEYjgug

He spoke with Stoltenberg, with President of the European Council Charles Michel, and with other dignitaries.

Armenia is traditionally a military partner of Russia. Turkey claims to want to give all possible support to Azerbaijan, but so far it has denied being involved in the conflict.

Russia is not helping Armenia because it does not want to risk its diplomatic relations with Turkey and Azerbaijan.

Moreover, Russia does not see itself bound to support Armenia, because the current violence is not taking place within internationally recognised Armenian borders. If this had been the case, the situation would be different. Russia’s attitude was confirmed only last week by President Vladimir Putin.

Violence in #NagornoKarabakh must stop.

Parties must respect ceasefire and return to negotiating table without preconditions.

Michel expressed deep concern on Twitter about the way things are going in Nagorno-Karabakh, and the humanitarian crisis that is causing the conflict. He immediately wants a new cease-fire, which must then be respected by both sides.

At least 800 people have died as a result of the new violence. Armenian attacks against Azerbaijan would have killed at least 63 civilians, including women and children.

No Azerbaijani soldiers have been killed, while the ethnic Armenians in Nagorno-Karabakh have reported 834 deaths.