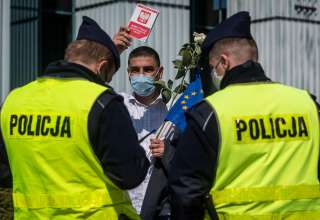 The presidential elections in Poland unexpectedly turned very tight. The votes are divided very even. However there are no indication that the results will be disputed.

Polish President Duda has increased his lead over his rival Trzaskowski in an updated exit poll. According to the poll, right-wing conservative Duda may count on 51 percent of the vote, liberal Trzaskowski on 49 percent.

The updated poll is based on voter polls at polling stations and on initial results from many of those polls. The votes of half a million Poles abroad have not been included in the exit polls.

The turnout in the presidential election was 68.9 percent, the highest percentage in the past thirty years.

Duda said at an election party that he was touched by the support of so many voters.

The Polish electoral commission does not expect to be able to come up with an official result before tonight. Then there may be a clear winner, but it is also possible that it is still not clear who won the elections.

If it is still uncertain who won, the Supreme Court will have to decide whether the election can be declared invalid. But many Poles are concerned that the court is not neutral, but in the hands of the ruling PiS party.

Internationally, there has been criticism for some time about how President Duda’s government deals with the rule of law.