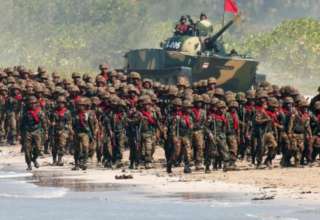 Protests in Myanmar against the military coup have increased again, after the army deployed more troops across the country last weekend to suppress the demonstrations.

Thousands of people protested in Rangoon, the largest city in the country.

Protesters blocked roads with cars to prevent security forces from moving. This was called up online.

In Myanmar, demonstrations have continued since the army deposed the democratically elected government of Aung San Suu Kyi. She’s under house arrest now. With the demonstrations, the thousands of Burmese on the street defied the military, who have not shy away from ending the demonstrations in recent days.

In the last two days, protests in Myanmar were considerably less massive after the army deployed additional troops in and around Rangoon. On social media, however, just before the junta shut down the internet, it chanted with the calls for mass demonstrations.

UN rapporteur Tom Andrews is very concerned about the military presence in Rangoon. “I fear that the possible violence on Wednesday is greater than what we have seen so far in Myanmar since the illegal seizure of power on 1 February.”

In the last few days, the military have used rubber bullets and tear gas against the demonstrators.

Suu Kyi could not become president due to legal obstacles raised by the army, but she was de facto head of government. The military junta is now prosecuting it for breaking a law on imports and exports and a law on emergency situations in the event of natural disasters.

The 75 – year-old Nobel Prize winner appeared on Tuesday through a video feed to the judge. Her lawyer, Khin Maung Zaw, was not allowed to attend the hearing.

Khin Maung Zaw said that the court has not yet recognized him as a lawyer for the Nobel Prize winner. He hasn’t been able to visit his client either. Suu Kyi is facing years in prison.

The military have also captured important allies of Suu Kyi. These include the deposed President Win Myint, who would also have appeared virtually in court on Tuesday. He is also suspected of violating the law on natural disasters. There would have been a violation of Coronation rules when Suu Kyi and Win Myint’s political party campaigned for the election.

The duo has to appear in court again virtually on 1 March. The army spokesman said that Suu Kyi and Win Myint are in a safe place and in good health.