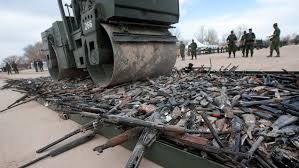 Mexico has filed a complaint in the United States against major arms producers such as Smith & Wesson and Glock. The state accuses them of fueling the drug war in the Latin American country.

Mexico has been the scene of a bloody battle between drug cartels for decades. Several presidents in the Latin American country tried to eradicate the violence. Vain. They all complained that they were facing an almost impossible task because of lax American weapons legislation. This allows manufacturers to flood the market with rigs that are very attractive to the cartels.

Because their calls for stricter arms control at the large neighbor in the North invariably fell on deaf ears, the Mexican authorities now choose a different strategy. Before a federal judge in the state of Massachusetts, they filed a complaint against ten major weapons manufacturers.

‘These companies are doing great damage to Mexican society by constantly supplying a stream of weapons to the drug cartels’, argues the Mexican state.