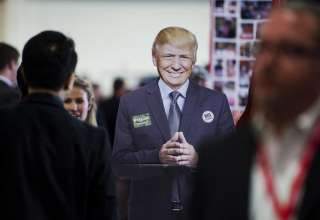 Take a life-size cardboard figure of Donald Trump to your dialysis treatment; Nelson Gibson from Florida did it to feel himself comfortable, but now it’s not allowed anymore. The American is furious.

The treatments Gibson undergoes over three hours and no family members can be present. A photo of Trump brought a solution.

“It feels like you are bringing something from home that makes you feel better,” the kidney patient told the local WPBT television station.

According to Gibson, nobody in the treatment center in Port St. Lucie complained about the photo. For the following treatments he took a small cardboard cutout on which he stood with Trump. According to the American, no complaints were made about that either. Photos were even taken.

When he took a life-size cardboard figure of Trump on a Saturday to assist him during the dialysis treatment, complaints were again absent. When he returned the following Tuesday with his presidential cut out of Trump, things went wrong.

“They said we were not at a Trump meeting and it was getting too much,” Gibson told the TV channel angrily. Son Eric asked the clinic why his father was no longer allowed to take his life-size Trump. “It would be a problem with an infectious disease, but that makes no sense,” the son responded.

According to Eric Gibson, the treatment center encourages patients to bring items that can provide support.

“Another patient brought bubble wrap to pop it during dialysis, which other patients find irritating,” he said.

A spokesperson for the clinic said in a response that patients are being encouraged to take “reasonable-sized” items. These objects must not cause any safety or infection problems or hinder the caregivers.

Gibson’s furious son cannot do much with that explanation.

“They shouldn’t hinder my father’s freedom of expression and expression. That cardboard Trump takes up less space than a garbage can.”