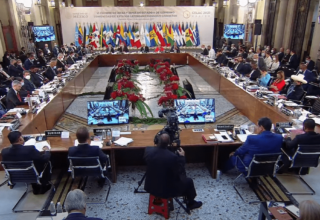 Left leaders Latin America want stronger alliance without US influence. Latin American countries must form an economic alliance, similar to the predecessor of the European Union. With that message, Mexican president López Obrador opened the summit of the community of Latin American and Caribbean States (Celac) on Saturday.

Especially the left-wing heads of state, including the presidents of Cuba and Venezuela, were present in the Mexican capital. A stronger Celac should take over the role of the United States-dominated Organization of American States (OAS), they believe.

The call from the Mexican president was reminiscent of the message with which the Celac was founded ten years ago. Even then, Latin American leaders dreamed of a regional forum of which the United States was not a part. The Celac, which United 33 Latin American and Caribbean countries, was to become that forum.

A decade later, the summit led by the interim president of Mexico this weekend particularly underlines that the young society is still far from a unity. The company was incomplete this time and was dominated by left-wing leaders, including the newly elected Peruvian President Pedro Castillo and last year’s elected Bolivian president Luis Arce.

In addition, the Mexican left-wing president opposed the few present right-wing leaders by flying into the controversial Venezuelan president Nicolás Maduro at the last minute. It was reason for Paraguayan President Mario Abdo Benítez to immediately express his dissatisfaction.

‘My presence here in no way means recognition of the Government of Mr. Maduro’, he said.

His Uruguayan colleague, Luis Lacalle Pou, expressed his worries about what is happening in Cuba, Nicaragua, and Venezuela. Cuban president Miguel Díaz-Canel was also present and a few days earlier was the guest of Honor during the celebration of Mexican Independence on 15 September.

Maduro riposted that he liked to debate with President Abdo Benítez about the state of democracy in Paraguay. Díaz-Canel claimed that Uruguayan Lacalle was unaware of the situation in Cuba. ‘For six decades, the Cuban people have shown courage and freedom in the face of the aggression and economic embargo of the United States.’ The proposal of the Mexican president to make Celac ‘the instrument’ for Latin-American Dialogue, therefore, was particularly welcomed by the left-wing people present in Mexico City.

’We need to build something on the American continent that corresponds to the economic alliance from which the European Union was born, ‘ López Obrador said.

Such a community should give the region more power as an economic bloc against the US and Canada in the North, without sacrificing national sovereignty, he said. Right-wing leaders stressed at the summit that the Celac and the OAS (headquartered in Washington DC, USA) can coexist.

While the Venezuelan leader, who maintains his power in his own country with strong repression, was the big and controversial surprise of the political summit, the left-wing Argentine president Alberto Fernández was the surprisingly absent. The peronist Fernández was, unlike Maduro, on the invited list, but cancelled at the last minute. It was possible that his ruling Left-wing coalition was severely punished last week during the by-elections. The largest Latin American country was also absent. Brazil’s far-right President Jair Bolsonaro cancelled Brazil’s Celac membership in early 2020.