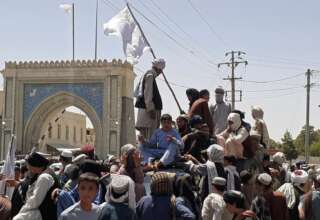 The last aircraft with American soldiers has left Afghanistan, the US Department of Defense confirms Monday. After 20 years, the United States ‘ presence in Afghanistan has finally come to an infamous end.

John Kirby, the Pentagon’s press secretary, and General Kenneth McKenzie, the commander of the U.S. command center, confirmed at a press conference that all U.S. troops have left Afghanistan. The US has thus met the deadline of 31 August, which US president Joe Biden had agreed with the Taliban.

American president Biden will address the American people on Tuesday afternoon (local time) about the withdrawal from Afghanistan. Shortly after the completion of the withdrawal on Monday evening, the White House published a statement by the president thanking US troops for “carrying out the largest airlift in US history.”

The jihadists have now regained control of almost all of Afghanistan. The Panjshir Valley, in the northeast of the country, is the only location they do not yet control. Taliban fighters celebrated the departure of the Americans by shooting into the air around Kabul airport.

A spokesman for the fundamentalist movement said that according to news channel Al Jazeera after the Taliban also confirmed that the US has left the capital Kabul after twenty years of presence.

Due to the deadline, many Western countries have had to rush to evacuate their ambassadors and Afghan employees in recent weeks. Because many Afghan citizens wanted to leave the country for fear of the Taliban, chaotic scenes arose at the airport of the Afghan capital.

American soldiers therefore stayed in Kabul to manage the evacuations. The Americans had given their allies until last Friday to evacuate their personnel. After that they needed a few more days to let all their soldiers and equipment leave.

The US invaded Afghanistan in 2001, shortly after the September 11 attacks of that year. According to the Americans, the Taliban in Afghanistan provided shelter and protection to the terrorists responsible for the attacks, including Osama Bin Laden’s al Qaeda.