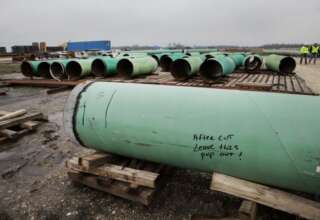 Plans for the controversial Keystone XL pipeline, which would be built between Canada and the United States, have been dropped. Canadian energy company TC Energy announced this on Wednesday, almost five months after US president Joe Biden decided to block the pipeline.

”After a full review of its options and in consultation with its partner, the Government of Alberta, TC Energy today confirmed that it is putting an end to plans for Keystone XL”, the company said in a press release.

Keystone’s plans cost $ 9 billion. The pipeline would carry oil from Alberta, in Canada, to the U.S. State of Nebraska.

However, the line runs through fragile nature and land belonging to indigenous tribes. The American tribes, including the Sioux Tribe, had already sued the U.S. government in connection with the pipeline.

Biden’s predecessor Donald Trump was a supporter of the project and secured a permit in January of last year. A federal judge in Montana shut down the project because of intended damage to nature. The Trump government appealed against this. A little over a year later Biden blocked the plans by presidential decree.