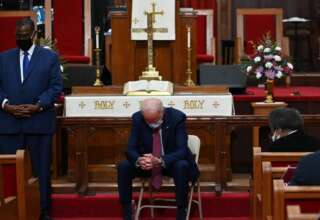 The black academic Donald Earl Collins speaks on the Arab News channel al Jazeera himself about a ” blue wall of white supremacy.” The police motto “to serve and protect” applies only to white people, Collins said, but not to black Americans like George Floyd.

“It’s ingrained, it’s Institutional, it’s personal, and it can be universal. All this is the key to why law enforcement in the US should be stopped and removed.’

“Defund the police” has been an important mantra of the BLM movement since George Floyd. This, while ultra-right Republicans are now calling for “defund the FBI” because of the recent FBI raid on a residence of former president Donald Trump in Palm Beach, Florida. Biden doesn’t really care.