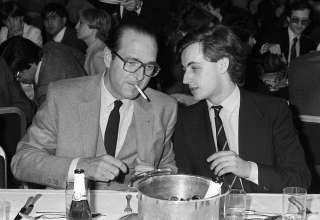 For most French people, the tall Jacques Chirac (1.92 meters) was also figuratively their last big president. A statesman with natural authority that his successors could only dream of. He introduced France into the 21st century as a 20th-century governor.

During his political career, which spans more than three decades, he held almost every conceivable political and administrative position. Before becoming president in 1995, he was, among other things, a member of the National Assembly, Secretary of State, Minister, Founder and Chairman of a political party and twice Prime Minister. He was mayor of Paris for eighteen years, before being President of the République for twelve years.

Chirac may have been in the political spotlight for many decades, but for the French he was always an enigma, a hard-to-gauge, somewhat mysterious man full of contradictions. Sometimes very amiable, then again surly and cynical. Social and empathetic, but just as often calculating and withdrawn. Courteous and personable, but sometimes abrupt.

Jacques René Chirac, who grew up as the only child in the Corrèze, a rural department in the south of central France, sold communist newspapers on the streets of Paris as a political science student in Paris. That he would be a loyal advocate of free-market capitalism four decades later is Chirac’s mind. He was a political chameleon who took on the color of the spirit of the times.

When he was a conscript, he did not have to be sent to Algeria as a student of the prestigious elite governing school ENA. But he went voluntarily, and with that he is the last French president who fought for his country as a soldier.

In 1976, Chirac, then Prime Minister, founded the Gaullist party Rassemblement pour la République (RPR). Following Charles de Gaulle, Chirac and his followers argued for a strong president with a lot of executive power, and insisted on the importance of national unity. During the reign of socialist president François Mitterrand, the RPR was the main opposition party in France. Chirac, now mayor of Paris, twice lost the presidential election during that period.

But Chirac had the gift of reinventing himself again and again as a politician. Like a phoenix, he repeatedly managed to rise from his ashes. After every defeat there was “the new Chirac”, who entered the battle with fresh energy and new spearheads. “Chirac is just like Beaujolais,” said politician Patrick Devedjian. “Every year there is a new one.” In 1995, three times ship law appears and Chirac becomes president.

At the international level, his most important achievement is undoubtedly his position against the Iraq war. War was in Chirac’s eyes “a very last option.” He refused to be carried away by George W. Bush and Tony Blair. 90 percent of the French supported that choice.

In his own country, Chirac’s presidency will also be remembered for his recognition of the French role in the Holocaust. As the first president, he recognized that the French Vichy regime was partly responsible for the deportation of French Jews. Chirac also goes into the history books as the first French president who was expressly concerned about climate change, with the famous words: “Our house is on fire, and we are looking the other way.”

But he failed to deliver on Chirac’s most important election promise – repairing the social fracture by lowering high unemployment. The France that the president left behind in 2007 was also characterized by high inequality and high unemployment. It hardly affected his popularity, especially after his resignation. In opinion polls, Chirac is time and time again one of the most loved French presidents. In some polls he even ends up for De Gaulle.

Chirac owes his popularity not only to his political endurance, but also to his charisma. Chirac was an original and engaging personality that easily won over people. Whether he spoke to the nation in a television speech or shook hundreds of hands at the annual Salon de l’Agriculture, the Paris farmers’ fair where he was a welcome guest: when Chirac spoke, the French listened. That he drank beer, smoked Gitanes and grew up in the rural Corrèze, worked to his advantage.

The charismatic president could also fly verbally from time to time. In a consultation with African government leaders in the 1990s, he said that Africa “is not yet ready for democracy.” As mayor of Paris, he talked about “the noise and the smell” that would result from immigration.

Few French presidents are as often embarrassed as Jacques Chirac. Imitators liked to use his inspired speaking style and his low, smeared and somewhat rasping voice. The gossip press also did not get enough of the president, who was known as a homme à femmes, a skirt hunter. The nickname “Mr. 5 minutes, shower include ’(Mr 5 minutes, including shower) has become a standing expression in France.

In 2011, Chirac was sentenced to two years in prison for misappropriating and abusing government money at the time of his mayor in Paris. He would have used that money to pay for his political party’s employees. Chirac was the first French former president who was convicted of corruption. Nevertheless, even after his conviction, he remained extremely popular with the French people.

In recent years, Chirac’s health has deteriorated and he no longer appeared in public life. In addition to his wife Bernadette, whom he married in 1956, he leaves behind a daughter and a foster daughter.