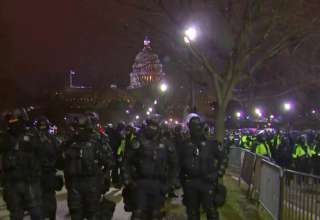 While Joe Biden was inaugurated on Wednesday as the new president of the United States, surely hundreds of anti-fascist supporters went out into the streets in various places. The American flag was burned, security agents attacked and intimidated, and the Democratic Party headquarters in the state of Oregon was besieged by extremists.

The extreme left-wing organization is opposed to the arrival of the Joe Biden (78) and the police. In Portland, there were confrontations with law enforcement. Some 150 activists gathered at the Revolution Hall and smashed the windows of the Democratic Party’s headquarters in Oregon. They also graffitied the walls of the building. The police made several arrests for that.

Even in Seattle, windows were smashed. One of them was a court building and a Starbucks branch. The police were attacked and thrown by the extremists. A police bike was stolen. When the police tried to get it back, officers were cornered by an aggressive mob, Fox News reports. The cops used a smoke bomb to get away. Extremists were found to have tubes and long knives in their pockets.

The Antifa supporters wore banners with slogans like ‘We don’t want Biden – We want revenge!” An action group moved to a detention center in defiance of American migrant policy. In Sacramento, California, activists moved to the local Capitol, but there it remained relatively quiet.