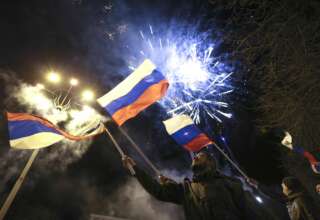 The deployment of Russian soldiers in eastern Ukraine is a peacekeeping operation, is dismissed by the US ambassador to the United Nations Monday evening during an emergency meeting of the UN Security Council as “nonsense”.

The Russian recognition of the self-proclaimed People’s republics of Donetsk and Luhansk, according to Ambassador Linda Thomas-Greenfield, is part of the pretext for starting a war. The consequences of the Russian actions “will be disastrous – throughout Ukraine, throughout Europe and throughout the world,” Thomas told the fifteen-member council.

“President Putin has torn the Minsk agreement to shreds. We have been clear, but do not believe he will leave it at that,” said Thomas-Greenfield, referring to the 2014 and 2015 accords that were supposed to end the conflict between the Ukrainian military and Russian-backed separatists in eastern Ukraine. The accords were never effective and were sabotaged by both Russia and Ukraine.

Tensions between Moscow and Western capitals are running high after weeks of accusations from the United States that Russia has deployed up to 150,000 troops near the border with Ukraine and is preparing for an invasion. Russia denies that it wants to invade Ukraine and accuses the west of hysteria.

Putin on Monday ordered the deployment of Russian troops in the East Ukrainian region of Donets Basin, “to keep the peace”. Bombardments and incursions of troops are on the rise.

Ukraine asked the UN Security Council to meet after Russia recognized the two breakaway regions. Eight members of the Security Council, including the US, UK and France, supported Kiev’s request.

The Russian UN Ambassador Vassily Nebenzia adjourned the meeting after the statements of the fifteen members. As a permanent member, Russia has a veto right, just like the US, the UK, France and China. Chinese UN Ambassador Zhang Jun said that “all parties involved should exercise restraint and avoid any action that could raise tensions”.

Sanctions as the only answer

The United States is going to impose sanctions on the Renegade pro-Russian regions in Ukraine. The White House announced this shortly after Russia recognized the two territories as independent states.

Americans are no longer allowed to invest and trade in and with the self-proclaimed People’s republics of Donetsk and Luhansk. President Joe Biden will issue the order soon. The sanctions were already prepared, because a Russian recognition was already taken into account. The US authorities warn that more sanctions may follow.

The sanctions that have now been announced are separate from the punitive measures that are already ready in case Russia invades Ukraine. The United States thinks the Russians are about to invade their neighboring country. Russia denies these plans.

Portugal’s top diplomat said in a statement that the United Nations “supports Ukraine’s sovereignty, independence and territorial integrity within its internationally recognized borders”. Guterres calls for an immediate stop to the violence, to protect civilians and not to let the situation get any further out of control.

The UN Security Council has now met to discuss the situation. President Putin has been attacked by the United States. UN Ambassador Linda Thomas-Greenfield told the 15 members of the council that Putin has stretched the boundaries of what can be accepted by the UN too far.

“Putin is testing the system. He’s trying to figure out how far he can go, ” the US said, which then made it clear that the Russians have crossed those borders. That Putin apparently flouts the Minsk agreements was endorsed by almost all the countries present. “That is a blatant violation of international law,” said the permanent member United Kingdom, which announced further sanctions.

NATO chief Jens Stoltenberg calls Russia’s recognition of Ukraine’s separatist regions as independent states a step towards an invasion of Ukraine. In an initial reaction, Stoltenberg condemns the move, which was taken Monday evening by president Vladimir Putin.

“Moscow continues to stir up the conflict in eastern Ukraine. This recognition goes against international laws that Russia also supports, ” the NATO chief said. It also goes against the Minsk agreements, where agreements were made on the situation in the Ukrainian Donbass region.

“This undermines Ukraine’s sovereignty even more and makes it difficult to find a solution to the conflict.”Stoltenberg urges Russia to try again to reach a diplomatic solution and withdraw the 150,000 troops at the Ukrainian border.

Stoltenberg has said NATO will not send soldiers if Russia invades Ukraine. Many countries have sent weapons to Ukraine. In neighboring countries that are members of NATO, more soldiers are stationed because of the Russian threat.

The United Kingdom is going to impose new sanctions on Russia because it has recognized two renegade regions in eastern Ukraine as independent states. British Foreign minister Liz Truss said the sanctions would be announced on Tuesday.

With the sanctions, the British respond “to the violation of international law and an attack on the sovereignty and territorial integrity of Ukraine,” said Truss. The minister said shortly before that he would not allow Russia to go unpunished.

British Prime Minister Boris Johnson also describes the recognition as a rejection of the Minsk agreements, which set in motion a peace process after the outbreak of the civil war in eastern Ukraine. “I think this is a very bad omen and a dark signal.”

Truss has also expressed dissatisfaction with Russia’s handling of the Minsk agreements. “This step signals the end of the Minsk process.”In addition, according to the minister, the decision shows that Russia has chosen confrontation over dialogue.

Johnson has warned Ukrainian president Volodimir Zelensky in a phone call Monday night that a Russian invasion within hours or days is “a real possibility”.

Johnson promised to send Ukraine more defensive support, which the country had already asked for. Johnson has also told Zelensky that the British sanctions that stood ready against Russian actors who are “complicit “in violating Ukraine’s” territorial integrity ” will go into effect on Tuesday.

German Foreign minister Annalena Baerbock called Russia’s recognition of the Renegade eastern Ukrainian regions of Luhansk and Donetsk a “gross violation of international law.”Baerbock says there will be an appropriate response and she calls on Russia to reverse the decision.

“The recognition of the separatist self-proclaimed People’s republics in eastern Ukraine by Vladimir Putin is a gross violation of international law and a serious blow to diplomatic efforts to reach a solution,” he said.

Chancellor Olaf Scholz’s office says he has already spoken to French and US presidents about the situation.

Moldova is a former Soviet republic, sandwiched between Ukraine and Romania. Also in Moldova there is an apostate pro-Russian region, Transnistria. That region, about the size of North Holland, is actually as good as independent but is not recognized by anyone. Transnistria borders Ukraine. An unknown number of Russian military personnel are stationed in the region, to the displeasure of the Government of Moldova. Ukraine said last week that the Russian military in Transnistria could be involved in an attack on Ukraine.

Shortly after recognizing the two people’s republics in eastern Ukraine, Russia announced a ‘peacekeeping mission’, which means that Russian soldiers are going to the area.

“Russia has torn apart the Minsk agreements. This shows that Moscow only wants to aggravate the conflict, and not reduce it, ” said Estonian president Alar Karis. “How we react now will determine what the generations after us look like,” Lithuanian Prime Minister Ingrida Simonyte said.

From other countries, too, there is displeasure about Moscow’s step. Polish Prime Minister Mateusz Morawiecki described it on Twitter as “an act of aggression against Ukraine.””The decision to recognize the self-proclaimed republics is a final rejection of dialogue and a flagrant violation of international law.”