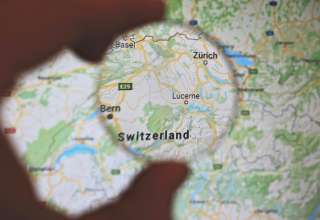 Our round up of stories that you might have missed this week include the Mouxit, smart bins and stupid people, an underground bike station, SBB double deckers and a two decade old murder.

As usual, we have tried to give you a good amount of information about the story and a link so you can follow up on it, if you want.

In 2017, nearly 52% of voters in the Swiss town of French-speaking Moutier chose to leave the mostly German-speaking canton Bern in favour of canton Jura (mostly French-speaking). The incident, dubbed ‘Mouxit’ by the Swiss press given its similarities to Brexit, was labelled a “political earthquake” and a “mess” in the media.

In November this year, the results of this 2017 referendum were declared invalid, amid allegations of improper propaganda by commune authorities as well as electoral tourism and possible vote rigging. Bernese authorities responded by saying Moutier’s switch from the canton of Bern to Jura was now impossible.

But, in another twist to the tale, Moutier has this week confirmed that it will appeal the decision to annul the vote. The town’s council intends to take the case to the cantonal administrative court and possibly to the Swiss Supreme Court; saying the decision to annul the vote was politically motivated. Judges are expected to take at least two years to reach a verdict on this – meaning the fate of Moutier has been put on hold.

Cold case starts to heat up

Police have arrested a car salesman who they suspect may have murdered an Egyptian diplomat in Geneva – 23 years ago. After years of searching, investigators dropped the case (which first made headlines in November 1995) almost ten years ago in 2009. But new technology has seen it reopened as DNA traces, found on the murder weapon, can now be linked to a suspect who is known to police for several thefts.

People are “too stupid” to use high-tech bins

State of the art rubbish bins have been installed along the banks of the lower Rhine river in Basel in an on-going experiment to test their value. The new bins contain an integrated press that allows users to use their feet to reduce space and maximise the amount that the bin can store.

While the idea might sound good, critics have pointed out that it would be even better if the bin could pick up rubbish as most people are “unfortunately too stupid” to use the technology correctly.

Basel is known for its litter problems but they are usually more prevalent in summer. The test will continue before a decision is made on their success and whether they are an efficient use of tax payers money.

The city of Lucerne’s Bahnhoffstrasse will undergo a significant redesign over the coming years as authorities want to install an underground bike station near the front of the train station, capable of holding 1100 bikes. The bike-park should be ready by 2023 and will cost 13.45 million CHF. The necessary redesigning of Bahnhoffstrasse will cost another 6.2 million CHF.

The announcement, made on Thursday, is part of wider plans to renovate Bahnhofstrasse. This comes following a 2013 vote which approved the initiative in an attempt to reduce congestion. Detractors have criticised the amount of time the project is scheduled to take, as originally the changes should have been made by 2019.

Thieves made off with a 3000CHF piece of installation art in Chur last weekend. The work, titled “Versponnen” (which can be translated as ‘weird’, ‘eccentric’, ‘meditative’ and ‘spun’) was made up of 11 spider-themed pieces in a former telephone booth.

The artist who created the piece, Kerstin Heinze-Grohmann has appealed for information regarding the theft on Facebook.

“It is sad that people enrich themselves at the expense of others by destroying and stealing art,” she said “The whole telephone booth was cleared. The thieves would have known what they were doing, because all the objects have been cleanly removed.”

The artist has contacted the police but says she just wants the work back, and has given the thieves a deadline of November 18 to return it to the phone booth or to contact her and hand it back over.

SBB has provided the necessary evidence to suggest that double decker trains are safe to operate. Despite objections from disabled users, the Federal Office of Transport has now ruled in favour of the plans to introduce 62 new double decker trains. Swiss Federal Railways must now schedule the commissioning of the trains and assess operational reliability.

The decision comes after disabled people organisation “Inclusion Handicap” appealed to the Federal Administrative Court against a license granting SBB to use the double decker trains initially for two years. The group is worried that unaccompanied travellers with disabilities would be unable to use the new trains, particularly because of the new entrances.

There are 15 issues that Inclusion Handicap have raised but out-of-court settlements have been reached with four of these issues. The Federal Administrative Court will rule on the remaining 11 issues.