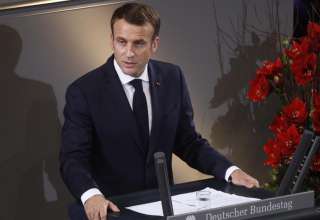 Macron complains in the magazine about “a total lack of coordination between Europe and the United States”. As an example, he cites the recent invasion of important NATO member Turkey in Syria: “An aggressive action in an area where our common interests are at stake.”

Turkey’s actions in northern Syria against Kurdish fighters were strongly condemned by NATO countries such as France, but also by the decision of US President Donald Trump to withdraw his troops from the region.

Macron’s statements are remarkably explosive and he seems to be setting the tone in the run-up to the NATO summit in the UK next month.

Chancellor Angela Merkel said in a reaction that she does not share Macron’s view of NATO. “NATO remains a cornerstone of our security,” Merkel said. NATO Secretary General Jens Stoltenberg also rejected the words of the French President.

While satisfied with communication between armies of NATO countries and joint operations, Macron believes that it is time to acknowledge that NATO has “a strategic and political problem.”

In particular, Macron criticizes the US commitment to NATO. According to him, the Americans should ask themselves what the contract organization stands for, because Trump sees the alliance “as a commercial project”. Macron adds that “Europe has the ability to defend itself”. He has often argued in the past for a European army.

In addition, it was “decisive” to approach Moscow “without naivety”. According to him, this process will take some time. Russia has always viewed NATO with great mistrust, as the alliance was founded in 1949 in response to the communist bloc of the Soviet Union.